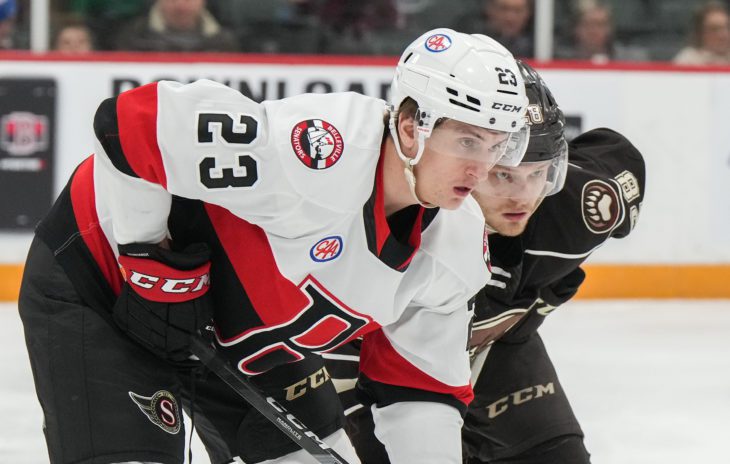 A difficult homestand came to an end for the Belleville Senators on Saturday night with a 4-2 loss to the Hershey Bears at CAA Arena.

After a scoreless first period, Belleville broke the deadlock just 29 seconds into the middle frame when Scott Sabourin found the back of the net with a redirection for his 13th of the campaign. Later in the stanza, the Senators extended their advantage through a Viktor Lodin one-timer on the power play to take a 2-0 lead after forty minutes.

Early in the third, Hershey began to mount their comeback as both Ethen Frank and Beck Malenstyn tallied on special teams to even the contest. The scoring continued throughout the frame for the Bears when Garrett Pilon made it 3-2 at the 13:37 mark before the aforementioned Frank collected his second of the game, this time notching into an empty net, to secure the road victory.

Sound Bytes: Head Coach Troy Mann: “I thought that was one of our best games for 45 minutes, and it’s just unfortunate the way it unfolded.”

Ticket info: Tickets for all Belleville Sens home games are available via Ticketmaster or at the CAA Arena Box Office.