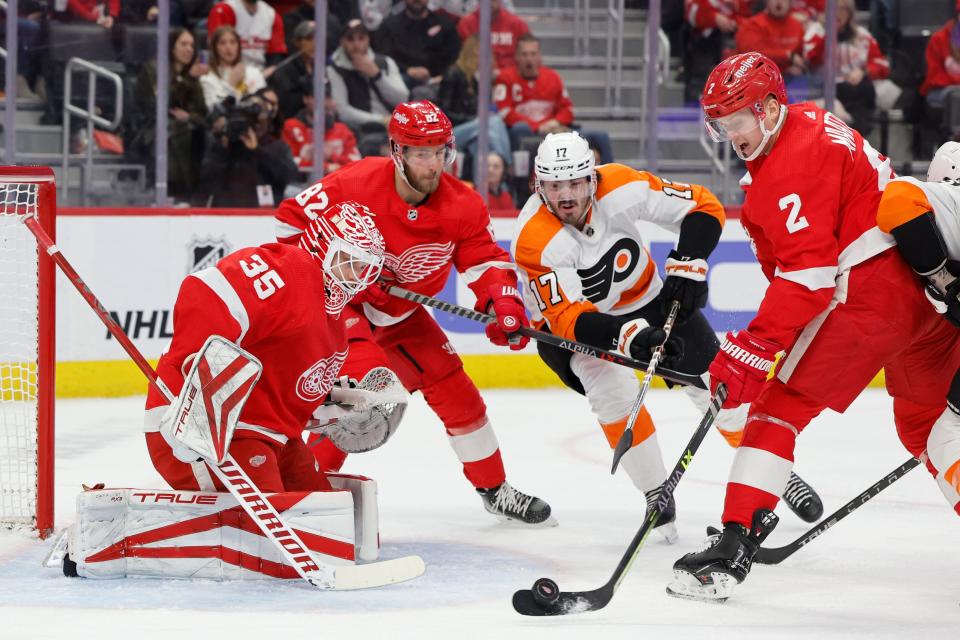 The first game back home after a trip West is a challenge: The travel plus the time-zone change makes for a grind.

There wasn’t much going for the Detroit Red Wings or the Philadelphia Flyers early on Saturday, with the sides playing an uneventful game over the first two periods at Little Caesars Arena. There were maybe a dozen scoring chances between the teams the first two periods. An error by the Wings marred an otherwise even performance, and they wound up losing, 2-1.

Scott Laughton got in behind the Wings defense midway through the third period, turning a pass from Kevin Hayes into a goal. The Wings undermined their chance to rally when Dominik Kubalik turned the puck over behind his own net, and Noah Cates turned that into a goal at 13:23. That prompted the Wings to pull Ville Husso with nearly four minutes on the clock. Lucas Raymond scored with 42.7 seconds left, going to the net to record his 15th of the season.

VEGAS RULES:Red Wings say ‘something like this will certainly build confidence’

Tyler Bertuzzi missed the game with a lower-body injury, but he could be back as soon as Tuesday, when the Wings 19-18-8) host the San Jose Sharks.

The Wings originally were scheduled to take the redeye home after Thursday’s game in Las Vegas, but about a month ago, Dylan Larkin suggested spending the night and flying home Friday. It worked the last time, after all: The Wings stayed the night after their Nov. 17 game in San Jose, California, flew home Friday, and played Saturday —and won. The Wings matched energy with the Flyers, especially Husso, who made three quick saves in a row mid period as the Flyers threatened down low.

Husso kept his side clean, and so did Carter Hart. The Wings had a good push after a power play past the midpoint of the first period, and Jake Walman forced two saves early in the second period. The Flyers missed on their first several shot attempts of the second period, sendings shots wide and failing to establish any cycles. It wasn’t until a handful of minutes in that Husso had…