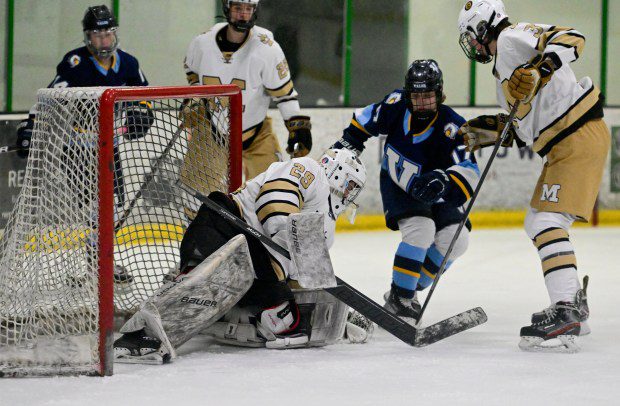 SUPERIOR — Monarch goalie Simon Holstein was hard on himself after his previous outing in net. He’s like that, he said.

The netminder from Peak to Peak told his coach it was his worst performance of the season after he gave up five goals against Ralston Valley last Friday, a game the Coyotes would have to climb out of two multi-goal deficits to draw.

On Thursday night, with one save after another, “he was back to his normal self,” coach Jimmy Dexter said.

If only it came in a win.

Holstein stopped a season-high 38 shots but Class 5A No. 4 Monarch fell in overtime to No. 2 Valor Christian, 3-2, at the Sports Stable.

The Coyotes were outshot, 41-23, and had just two power play chances to the Eagles’ six. Holstein balanced the scale until Noah Fekete’s winner with 2 minutes, 10 seconds remaining in the extra period.

“He had no chance at that overtime goal,” Dexter said. “Just a great pass across, on the backdoor. He couldn’t have saved that. He was unbelievable tonight.”

Vincent Felt scored in the opening period for Monarch (6-2-1, 2-2-1 5A Metro), continuing his torrid streak with his seventh point over his last three games. Branden Desouza-Chen added his first goal of the season in the second to give the Coyotes another lead until Alec Alfieri’s equalizer with 10:41 left in regulation.

“It definitely picks up the confidence” after tonight, Holstein said. “After that Ralston Valley game, I was a little bit shaky, like ‘ooo I got to pick this up.’ After this game, the confidence is high.”

Desouza-Chen gave Monarch a 2-1 lead on a rebound chance in the moments following its first power play of the night.

By the time an Eagles player got back into position, Ben Rosenberg had already ripped a chance off Valor Christian keeper Cooper Robinson from the left. And like a perfectly executed bounce pass off the goalie pad, the Fairview junior corralled the rebound and…