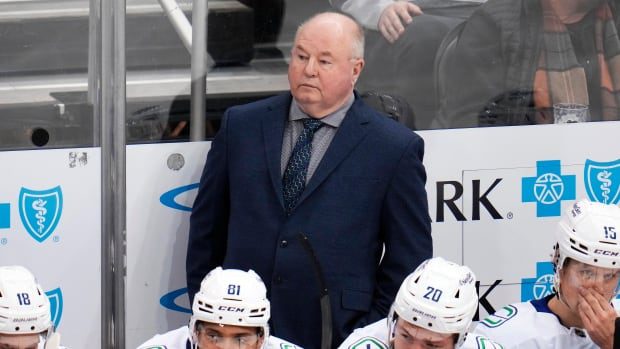 “I’d be a fool not to say that I don’t know what’s going on,” Boudreau said Friday. “But… you come to work and you realize, you know how great the game is.”

Tears welled in his eyes as he spoke.

Talk of Boudreau’s departure have circulated since the beginning of the season when the Canucks (18-23-3) got off to an ugly 0-5-2 start.

Under his guidance, the Canucks finished last season 32-15-10 and missed the post-season by five points.

But the success didn’t transfer into the 2022-23 campaign. While the Canucks have consistently found ways to score, they’ve also given up an average of 3.96 goals per game and the team’s penalty kill has been a liability, operating at a league-worst 66.9 per cent.

Vancouver sat sixth in the Pacific Division, 12 points out of a playoff spot ahead of a matchup with the Colorado Avalanche on Friday.

Rick Tocchet potentially next in line to coach Vancouver

Reports have ramped up in recent days that the Canucks plan to bring in former Tampa Bay Lightning and Arizona Coyotes coach Rick Tocchet any day now.

Jim Rutherford, the team’s president of hockey operations, told reporters on Monday that he’s had conversations over the last few months about bringing in a new coach, but has always been clear that Vancouver is not looking to — and does not want — to make a change.

“Bruce is our coach right now,” he said.

“I’ve got my wife phoning me saying ‘You’re not on the ice! Is everything OK?”‘ Boudreau said.

Asked how he responded, the veteran bench boss was emphatic.

‘It’s tough not to feel it’

A former centre for the Toronto Maple Leafs and Chicago, the 68-year-old Boudreau previously coached the Capitals, Anaheim Ducks and Minnesota Wild. He won the Jack Adams trophy as the league’s top bench boss in 2008.

Asked Friday what it means to be a head…