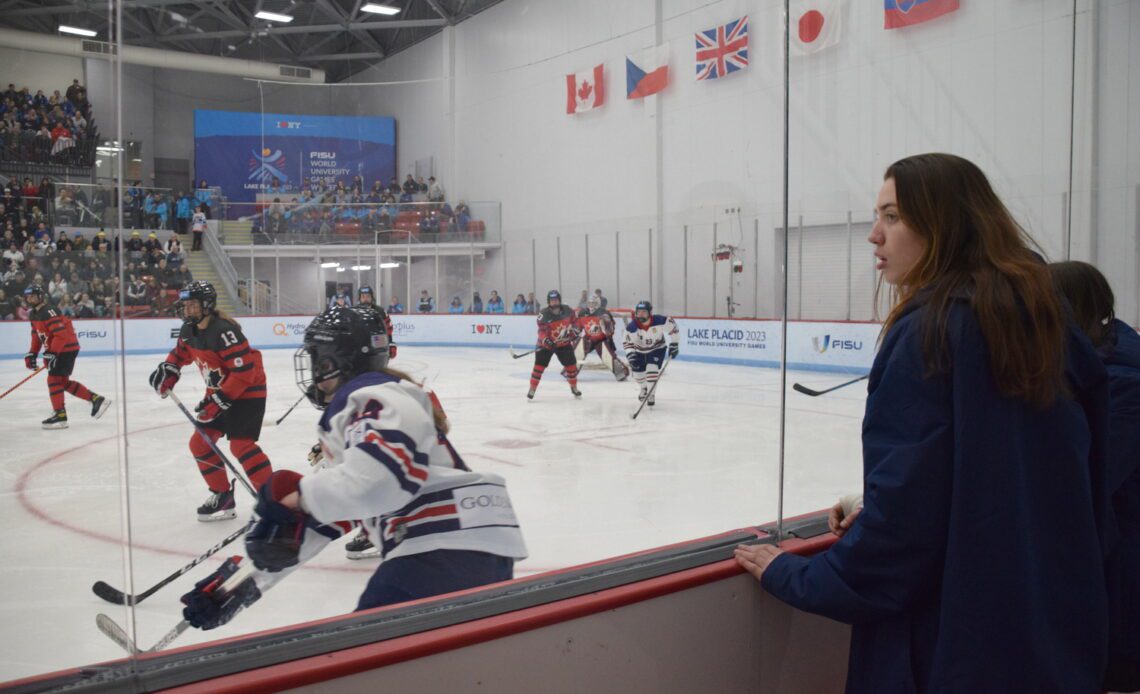 Savannah Popick watches her teammates from the edge of the ice. Photo: Lucy Grindon

One of the most-anticipated match-ups so far of the 2023 FISU World University Games was the faceoff between the U.S. and Canadian women’s hockey teams.

The game was this Wednesday night, with a sold-out crowd, at Maxcy Arena in Potsdam.

The U.S. and Canada have one of the fiercest rivalries in hockey.

Players chase the puck down the ice. Photo: Lucy Grindon

“This is probably the most exciting game so far, and it’s Canada and the U.S., of course,” said Tony Vavra, one of the games’ local volunteers.

“How many times can you do this?” Vavra said. “It only comes here, in Potsdam, once in a lifetime, so why not?”

Games volunteer Tony Vavra opens a door onto the ice for a referee. Photo: Lucy Grindon

Every seat in the arena was taken. Another hundred or so people stood to watch. But Vavra had the best spot in the house. He was in charge of opening the door that lets players on and off the ice for breaks, so he stood right on the perimeter of the rink, his nose almost touching the plexiglass. Players collided with the boards just inches from his face.

One U.S. player, Savannah Popick, stood just off the ice in a big, navy blue coat. She pounded on the glass with one hand and shouted encouragements at her teammates. Her other arm was in a sling, with a white cast on it. Across the arena, her mother Mary Popick said she’d broken her arm in a game.

Savannah Popick of the U.S. team bangs on the plexiglass boards on the rink’s perimeter to encourage her teammates. Photo: Lucy Grindon

“It’s very exciting to have them playing Canada. This is a very good game. The countries have always been rivals for many, many years so it’s a very good game,” Mary Popick said in between cheers of “C’mon USA!”

Mary Popick waves a small American flag as players come off the ice for a break in play. Photo: Lucy Grindon

The U.S. needed to win this game to stay in the tournament. And Canada had already scored twice. Finally, the U.S. team got a shot past Canada’s goalkeeper. But the clock was ticking down toward zero, and they couldn’t seem to score again.

The players zoomed back toward Canada’s net again and again, but when the last buzzer sounds, Canada won, two to one.

Team USA was knocked out of the tournament….