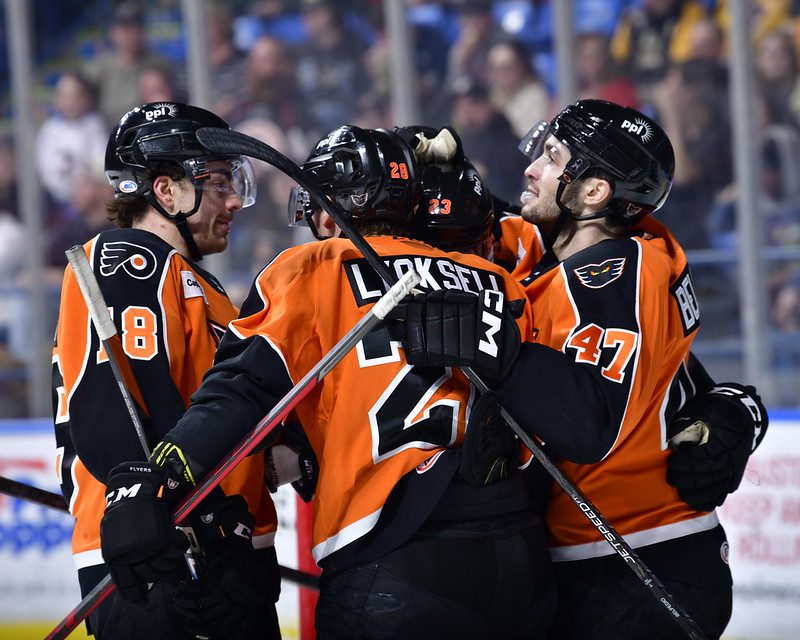 Wilkes-Barre, PA – Cal O’Reilly made American Hockey League history with his 700th career AHL point, Tyson Foerster (12th, 13th) scored twice, and the Lehigh Valley Phantoms put forth a second period for the ages to beat the Wilkes-Barre/Scranton Penguins by a 5-2 count on Friday night. With their impressive victory, the Phantoms rise to a high-water mark five games above .500, and leapfrog the Pens and Charlotte Checkers to third place in the Atlantic Division standings.

In addition to Foerster’s two-goal performance, Jackson Cates and Max Willman both recorded two assists to help Lehigh Valley (19-14-5) to its third consecutive victory as the Phantoms racked up a season-high four goals in a period as part of a powerful middle frame. The Phantoms have points in seven of eight games (5-1-2) in January and have gone 5-0-1 on their pair of three-game road trips since the New Year.

Wilkes-Barre/Scranton (18-13-5) drew first blood against Lehigh Valley, but Samuel Ersson and the Phantoms’ special teams were fantastic to limit the early damage. In a free-flowing period from the start, Ersson made his first of 15 saves in the opening frame only 30 seconds in. A breakaway save on Drake Caggiula in the opening shift helped keep the Baby Pens at bay until midway through the stanza.

At the 9:58 mark, Wilkes-Barre/Scranton tallied on Lukas Svejkovsky’s second goal of the campaign. Transitioning into the Phantoms’ zone, Tyler Sikura connected with Svejkovsky driving towards the crease. After chipping his first chance on net, Svejkovsky followed his own rebound and buried the loose puck initially denied by Ersson’s leg pad.

Lehigh Valley’s penalty kill had a tough task later in the first period, needing to kill a 5-on-3 Penguins power play for nearly two minutes. But Ersson was tremendous in net and active sticks by Egor Zamula, Cal O’Reilly and Louie Belpedio clogged the Penguins’ passing lanes during the 1:55 two-man disadvantage.

After surviving the first period, the Phantoms put forth perhaps their best period of the season from start to finish. Only 1:52 into the new frame, Wyatte Wylie (2nd) blasted home his second goal of the season on a one-timer from the point past Pens’ netminder Filip Lindberg. Captain, and future American Hockey League Hall of Famer, Cal O’Reilly, earned the primary assist for his coveted 700th career AHL point becoming the…