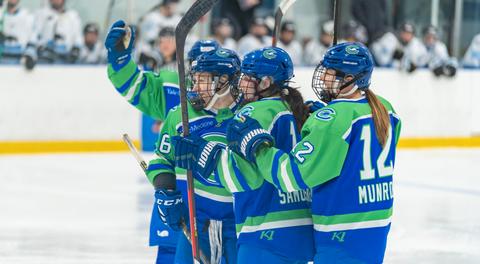 Another mid-week matchup was played in the Premier Hockey Federation, the second of a November postponement.

Connecticut scored a season-high seven goals to complete a mid-week sweep over Buffalo at ISCC. Kennedy Marchment led the way with her first career hat trick to give her seven goals in her last four games and extend her point streak to six. The Whale exploded for four-straight goals in the first period alone, beginning with a Melissa Samoskevich shot at 1:42. Emma Vlasic, Marchment, and a Justine Reyes power-play goal made it 4-0 all within the first 14 minutes. The Beauts got one back in the first period with Summer-Rae Dobson scoring just seconds before the break. Claudia Kepler helped build a comeback with a second-period power play snipe and another goal in the third to cut the deficit to one with her sixth of the year. Marchment restored the two-goal spread with her second of the game just 38 seconds later, Hannah Bates followed with her first of the year, and Marchment’s third into the empty net solidified the decision. Abbie Ives made 20 saves to earn back-to-back wins, while Tera Hofmann got the start for Buffalo and stopped 42.