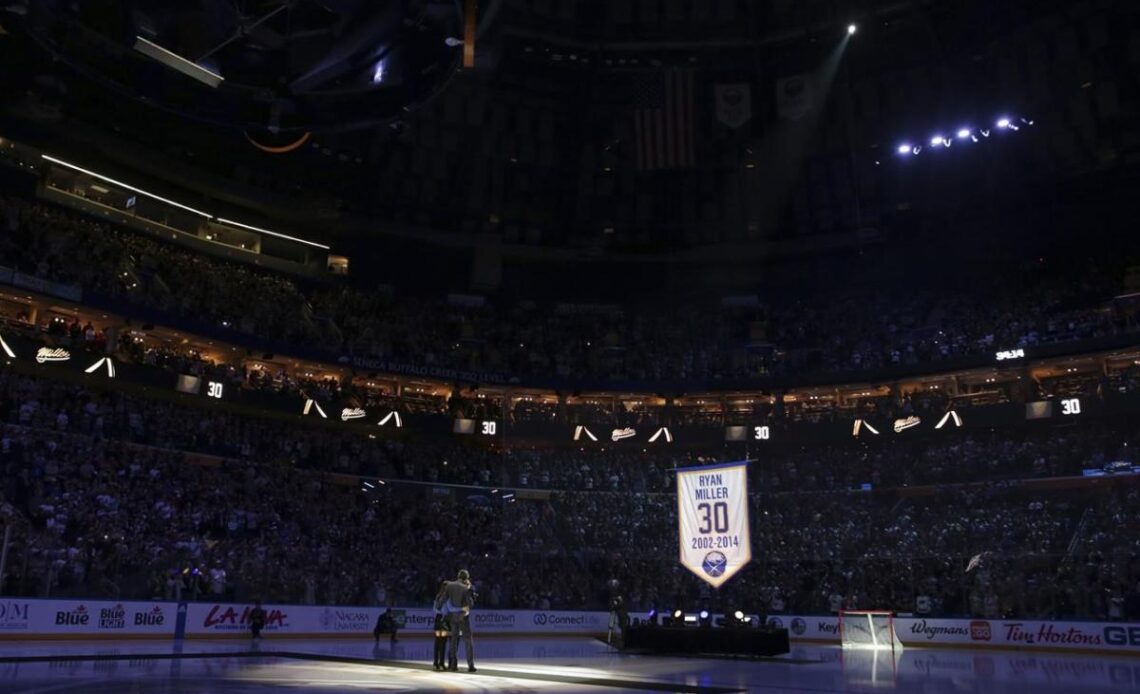 BUFFALO, N.Y. (AP) — Ryan Miller grew up idolizing goalie Dominik Hasek, and upon signing with the Buffalo Sabres in 2002, fantasized of one day having his name and number hang from the arena rafters.

Not only did Miller’s dream become reality on Thursday night, he was wowed by having Hasek appear by video from his home in the Czech Republic to welcome him into the exclusive club with the Sabres.

“Ryan, I’m honored to be a part of your night. As goalies, we know what the position demands, all eyes fixed on you,” Hasek said during a ceremony held before Buffalo’s game against the New York Islanders. “I am proud of the history we both made here in this city, in front of these fans.”

In taking over as Buffalo’s starting goalie in 2005, four years after Hasek was traded to Detroit, Miller established himself as one of the franchise’s best over 10-plus seasons with the team.

“It was just amazing to have him say kind words about me because that’s exactly how I would observe his hockey,” said Miller, who wore Hasek’s No. 39 through his junior and college career at Michigan State before switching to No. 30 upon joining the Sabres as a fifth-round pick in 1999.

Miller, in street clothes, joined the Sabres’ celebration on the ice following their 3-2 overtime win against the Isles. After fist-bumping Sabres players, Miller was surrounded by the team and posed for a group photo at the blue line.

Miller broke some of Hasek’s records, and still ranks first on the franchise list with 284 wins, 540 games played, and a single-season mark of 41 victories. From East Lansing, Michigan, Miller’s 391 wins — two more than Hasek — split over four teams over 18 seasons, rank first among U.S.-born goalies, and 14th overall.

He retired from the NHL two years ago following four seasons with Anaheim. He also played with St. Louis and Vancouver.

Miller is best remembered for his time in Buffalo. In 2006 and ’07, he led the Sabres to consecutive Eastern Conference final appearances, which Buffalo lost both times.

And then came his Vezina Trophy-winning season in 2009-10, which coincided with Miller backstopping the United States to a silver medal at the 2010 Vancouver Games, where he was named the…