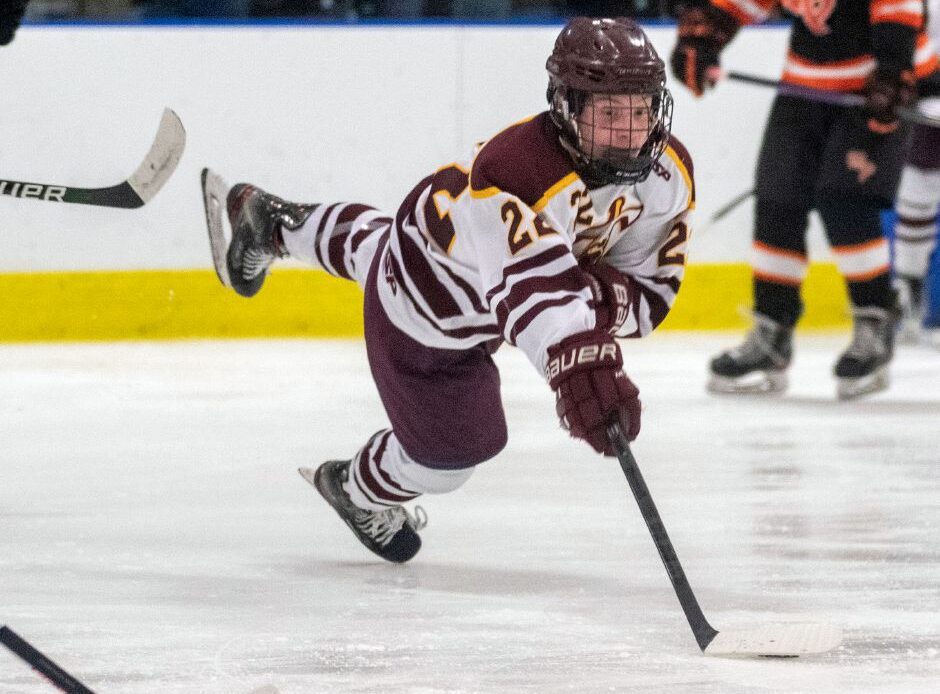 WALLINGFORD — Some ties carry more weight than others, and the 3-3 draw to which the Sheehan hockey team played against Guilford at Choate’s Remsen Arena late Wednesday night was one of those.

Paired with one of the top teams in Division II, the Titans earned the SCC/SWC tie when Landon Cantele answered a late go-ahead goal by Guilford.

Gabe Mongelli put the Grizzlies up 3-2 with 3:37 to play. All of 20 seconds later, Cantelle connected off assists from Michael Ballough and Max Festa.

The game was physical throughout and Sheehan coach Dave Festa was proud of the way his team, now 4-5-2, fought against an 8-1-1 Guilford group.

“This was a great game for us,” Coach Festa said. “This was a great moral victory against a top team in the state who had only one loss coming into this game, and we found out that we could play with them.”

At the onset, the Grizzlies showed why they were 8-1 on the season. They controlled the tempo and established a 1-0 lead 3½ minutes in when senior defensemen Mitchell Ward scored from long range.

Sheehan was able to turn fortunes around midway through the period when Guilford’s Nathan Ponzio earned a trip to the penalty box for a cross-check The Titans took advantage on the power play to knot the score at 1-1. Ballough had the goal, Garrett Wilkinson and Max Festa the assists.

“We had some great puck movement on that goal,” Coach Festa said. “We knew that they were a team that would take some penalties. They are an emotional team and we knew if we got under their skin there would be some power play opportunities.”

The emotions would soon boil over going into the second period. Tempers flared after Titans freshman Preston Cantele was hit hard into the boards and remained down on the ice for several minutes.

No penalty was called and Coach Festa exchanged heated words with the officials.

“I thought it was awful and it’s kind of expected now,” Festa said of the non-call. “The reffing has been completely inconsistent across the board. Unfortunately, kids are getting hurt and Preston got hurt with a high hit and nothing was called. It is very frustrating, to be honest with you.”

The Titans were able to rally, with Max Festa scoring his 22nd goal of the season, assisted by David Fritz and Billy Totz, to give…