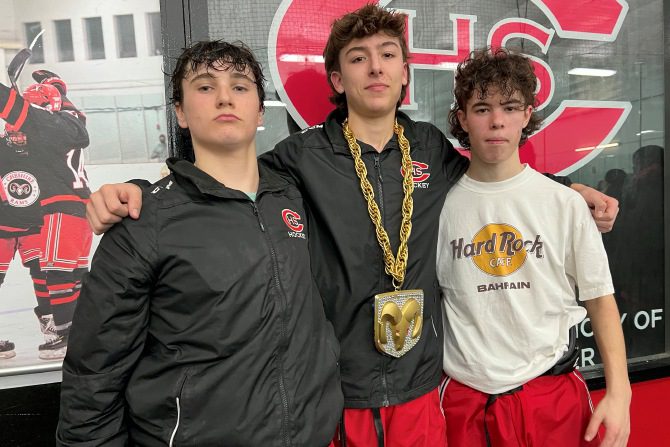 With 5:48 remaining in the third, junior Biagio Pepe scored on a feed from senior co-captain Rocco Ocone-Krause to cut the deficit to 5-4.

After pulling junior goalkeeper Ginny Curello for an extra skater, CHS tied the game with 41.6 seconds remaining in regulation. Ocone-Krause passed to junior assistant captain Evan Vasiljevs, who fired a shot at the net. WH senior goalkeeper Kiryl Astravukh made the save, but senior Andrew Vaill converted on the rebound.

CHS completed their comeback with 4:16 remaining in overtime, as junior Drew DePodesta tallied the game-winner on a rebound. Ocone-Krause assisted on each of the last three goals.

DePodesta’s tally earned Cheshire’s only lead of the game.

WH struck first on a goal by junior Yousaf Ullah with 11:47 left in the first period, but just a minute and 32 seconds later, Vasiljevs scored to tie the game.

The Blue Devils responded with two goals from junior Jayden Spreyer to take a 3-1 lead at the end of the first period. Spreyer’s second tally came on a power play.

Sophomore Thomas Porto found the back of the net to put WH up 4-2 with 11:31 left in the second, however with just 20 seconds remaining in the frame, Cheshire responded with a goal by Kelly. Pepe and freshman Liam O’Dea assisted on play.

In rallying to get the win, the Rams outshot the Blue Devils 50-25. Curello made 20 saves and Astravukh stopped 44 shots.

For WH, Spreyer and junior Michael Madera both had two assists.

On Saturday, CHS competes in the Colter Abely Wrestling Tournament at Mercy in Middletown. Start time is 8 a.m.