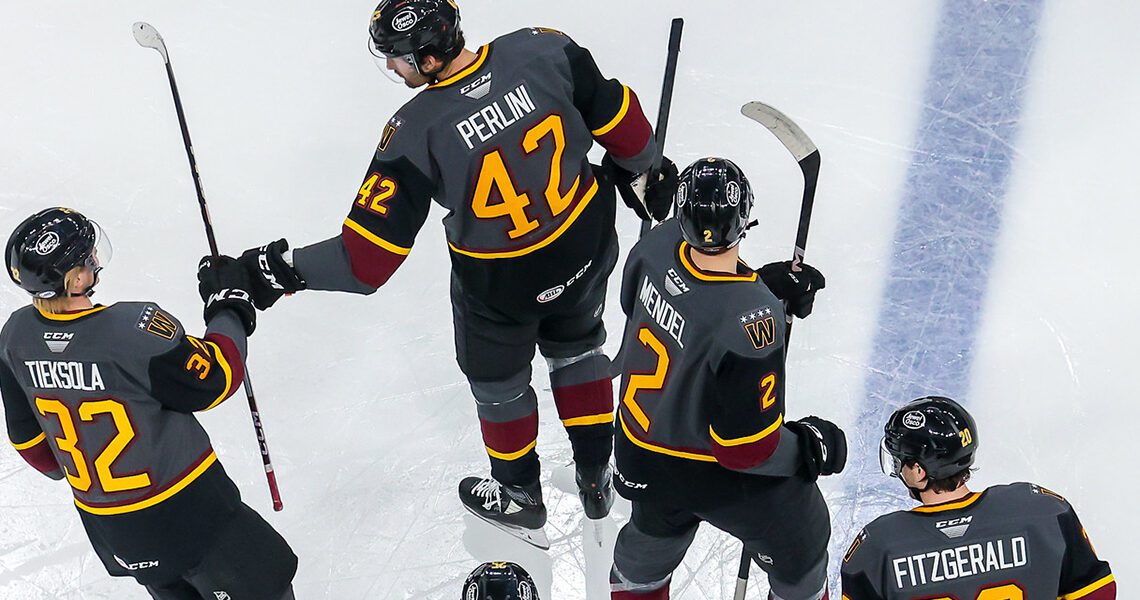 Six different players scored and goaltender Pyotr Kochetkov made a triumphant return to the lineup as the Chicago Wolves thumped the Manitoba Moose 6-2 on Wednesday night in Winnipeg.

Jack Drury, Tuukka Tieksola, Nathan Sucese, Brendan Perlini, Ryan Suzuki and Joseph LaBate had goals while Kochetkov – playing for the Wolves for the first time since Nov. 4 – made 19 saves to help the defending Calder Cup champions earn a split of back-to-back games between the Central Division rivals.

Thirteen Wolves had at least one point in the game, including Anttoni Honka and Noel Gunler with two assists each, as Chicago improved to 1-2-0-0 on its season-long, six-game road trip.

After being blanked the previous two games, the Wolves didn’t take long to break the scoring drought as Drury notched his fourth of the season early in the opening period. The center pounced on a rebound of a Honka shot in the slot and fired it past Moose goaltender Oskari Salminen to the stick side for the Wolves’ first goal in 124 minutes, 49 seconds.

Riding the momentum of that score, the Wolves struck again when Tieksola redirected a long shot from Honka for his third goal of the season. Honka’s second assist of the game gave him 14 on the season.

Late in the first, the Moose cut the Wolves’ lead to 2-1 on a goal by Leon Gawanke but the Wolves answered back in the waning seconds on Sucese’s score. The forward banged home a rebound from the slot of a Malte Stromwall shot for his eighth goal of the season. The assist gave Stromwall his team-leading 25th point.

Chicago kept rolling and made it 4-1 early in the second on a terrific individual effort by Perlini. The veteran winger intercepted a pass at the far blue line, raced in on Salminen and buried his ninth goal of the season.

Suzuki’s power-play goal early in the third made it 5-1. The center was credited with his fifth goal of the season when a Max Lajoie shot deflected off Suzuki and bounded into the net.

Brayden Burke found the back of the net to pull Manitoba to within 5-2 but that was as close as the Moose got.

LaBate completed a Gordie Howe Hat Trick (goal, assist, fight) when he knocked in a rebound of a Griffin Mendel shot for his third goal of the season.

Kochetkov, who was reassigned to the Wolves from the Carolina Hurricanes on Monday, recorded the win while Salminen (30 saves) suffered the loss for Manitoba.