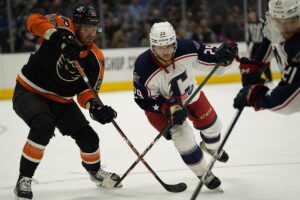 TONIGHT
The Lehigh Valley Phantoms conclude their season series against the Cleveland Monsters, AHL affiliate of the Columbus Blue Jackets as they also open play in the second half of the season. Lehigh Valley has played 36 games in 2022-23 and has 36 games remaining.
Lehigh Valley (17-14-5) had points in five out of six games (3-1-2) in 2023 including a 3-1 win at Cleveland last night to open a three-game road trip.
Cleveland (14-17-4) has just two wins in its last 10 games and has also lost six consecutive home games.
The Phantoms are in fifth-place in the Atlantic Division just two points back of Wilkes-Barre/Scranton and three points away from third-place Charlotte.

LAST TIME
Tuesday, January 17, 2023
Phantoms 3 – Monsters 1
Felix Sandstrom and the penalty kill for clutch in Cleveland in a 3-1 win on Tuesday night. The P.K. held the potent Monsters’ power play to 0-for-6 while Sandstrom made 28 saves and came just 19.8 seconds away from a shutout. Ronnie Attard (5th) scored on the power play while Louie Belpedio (3rd) and Bobby Brink (3rd) with an empty-netter also registered for the Phantoms. Brink and Belpedio both had two-point games. The Monsters entered the game with the league’s second-best power play at 26.4% but were unable to break through against the hard-working defenders of the Phantoms.

FELIX’S CONDITIONING LOAN
Tonight is the last game of Felix Sandstrom’s two-week conditioning loan to the Lehigh Valley Phantoms. Sandstrom has started six consecutive games since arriving from the Philadelphia Flyers and has gone 3-1-2, 2.65, .906. He has allowed just one goal in two games, including a 3-1 win at Bridgeport on January 11 with 35 saves and a 3-1 win at Cleveland on January 17 with 28 saves.
Sandstrom has been the backup goalie with the Philadelphia Flyers this season and recorded his first NHL win on November 8 with 27 saves in a 5-1 win over the St. Louis Blues. The Flyers’ third-round selection in the 2015 NHL Entry Draft has played in 14 career games with the Flyers including nine this season.

OVERTIME STRANGENESS
The Phantoms are 3-3 in overtimes this year with all three of their wins coming on the road and all three of the extra-period losses coming at home. Louie Belpedio, Cam York and Artem Anisimov have scored OT winners for the Phantoms in October, November and December…