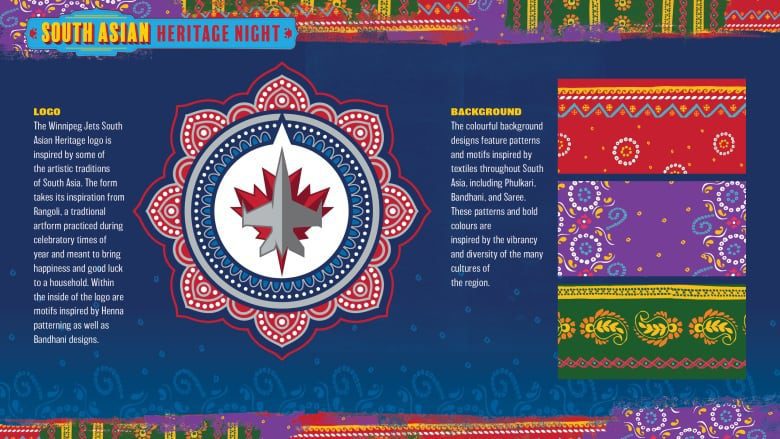 The Winnipeg Jets will sport jerseys with a logo inspired by various South Asian designs as part of a new heritage night next month.

The jerseys players will wear during warmups on Feb. 11 will feature designs from traditional art forms, including rangoli, henna and bandhani, as part of a new South Asian heritage night, a news release from the team said on Monday.

“Everything we’ve heard has been very positive and well-received. And I think the impression that I’ve got, anyway, is that the community is just really excited to be seen and acknowledged.”

The organization said the colours and patterns of the latest jersey are inspired by “the vibrancy and diversity” of the many South Asian cultures.

Its inspiration comes from the colours and textiles of the South Asian community. Find out more about the Winnipeg Jets South Asian Heritage Night Logo and what it means to the person who designed it.

Colours in the background of the reimagined Jets logo are inspired by fabrics found in South Asia, including phulkari, bandhani and saree.

The logo was created in partnership with local graphic designer Charmi Sheth, who came to Winnipeg from Aminabad, India.

“She contributed some really cool detail that we were able to incorporate into the logo,” Dudych told CBC Up to Speed host Faith Fundal on Tuesday.

“We’ll be showcasing some of her artwork into some of the game elements as well.”

After the Feb. 11 game against the Chicago Blackhawks at Canada Life Centre, the jerseys will go to auction in support of Punjabi Community Health Services Manitoba. The auction runs from 5 p.m. CT on Feb. 16 until Feb. 26 at 8 p.m.

Merchandise with the logo will go on sale at the Jets Gear store the week of Jan. 23, with a portion of proceeds also going to the Punjabi Community Health Services Manitoba.

The arena is going to open half an hour earlier than usual the night of the game so fans can come take in a range of South Asian food and performances.