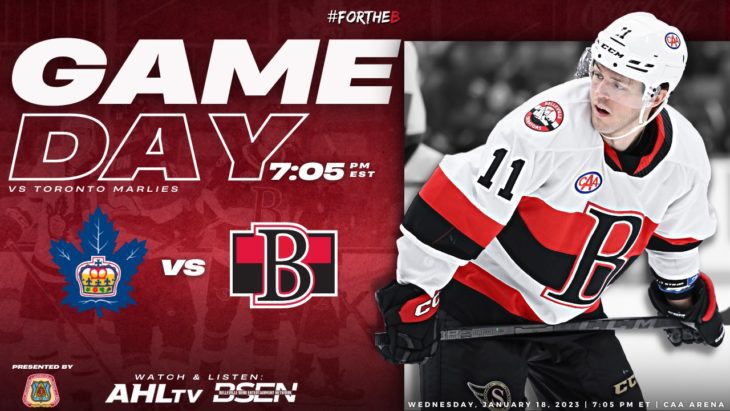 Needless to say, the Belleville Senators had a rough week last week, dropping decisions to the Cleveland Monsters (2-1 on Friday ) and Manitoba Moose (4-2 on Saturday), but things don’t get any easier this week as the top two teams in the AHL’s Eastern Conference come to town. The Sens host the Toronto Marlies at CAA Arena tonight and Friday before a visit from the Hershey Bears on Saturday. Angus Crookshank and Ridly Greig scored for Belleville last Saturday, with Mads Søgaard making 19 saves. Toronto is coming off a 7-5 win against the Rochester Americans last Saturday they’re fifth in a row. The Marlies also have points in 12 of their last 13 games.

The marathon that is the AHL’s Battle of Ontario is into its seventh game tonight, with Belleville holding a 2-4-0-0 record against Toronto so far this season. The Marlies have won the last two meetings, including a 3-2 win on Boxing Day at Scotiabank Arena and a 4-2 victory back in Belleville a couple of days later. In 60 games lifetime against Toronto, the Sens are 30-36-2-2 and 12-16-0-1 at CAA Arena.

Defenceman Jacob-Bernard Docker was recalled back to Ottawa following Saturday’s game and won’t be available to the B-Sens tonight. Jack Dougherty will stay in the lineup to take JBD’s place after returning last weekend from a few games off as a healthy scratch. The Sens are also hoping to have forward Jake Lucchini back from Ottawa tonight after the 27-year-old will was placed on NHL waivers yesterday for the purpose of returning him to the AHL. Though, he could potentially be claimed by another team and will have to clear waivers at 2:00 p.m. ET to be eligible to play tonight. Forward Brennan Saulnier is back from a six-game injury break, but Belleville does have a few more additions to the injured list, including both Mads Søgaard and Antoine Bibeau, which means Kevin Mandolese will start in goal. Emergency backup Alex Horawski will dress tonight as well.