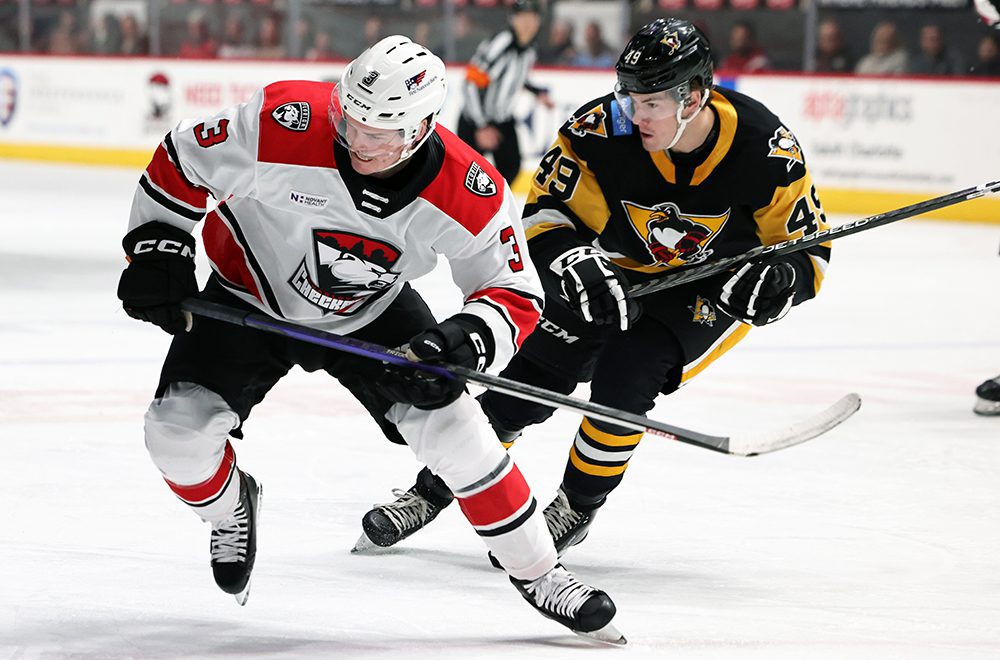 Wilkes-Barre/Scranton continues to thrive in adversity

Wednesday, Jan. 11 – PENGUINS 4 at Hershey 3 (OT)
Jonathan Gruden led the way offensively with his second-straight two-goal game, but this time, he delivered the overtime game-winner. Lukas Svejkovsky and Raivis Ansons both tallied their first AHL goals during the second period.

Saturday, Jan. 14 – PENGUINS 1 at Charlotte 3
Gruden scored again, but his continued hot streak was the only positive to come out of the Penguins’ loss to the Checkers. Taylor Gauthier started his sixth game in a row for Wilkes-Barre/Scranton but left with an injury after the first period.

Sunday, Jan. 15 – PENGUINS 3 at Charlotte 2 (SO)
Wilkes-Barre/Scranton bounced back and pulled off a gritty, shootout win in the second game of its back-to-back in Charlotte. Down 2-1 in the third period, a power-play goal in from Valtteri Puustinen forced OT, then Alex Nylander and Svejkovsky scored on both of the team’s shootout attempts. Filip Lindberg finished with 29 spectacular saves.

Friday, Jan. 20 – PENGUINS vs. Lehigh Valley
The Penguins are 3-0-1-0 against their PA Turnpike rival this season and welcome them back to town for an Eyewitness News Fan Friday; select $2 beers on sale from 6:00–7:30.

Saturday, Jan. 21 – PENGUINS at Bridgeport
Wilkes-Barre/Scranton hasn’t beaten Bridgeport yet this season, but the Islanders are trying to course correct after an extended skid. From Dec. 14–Jan. 11, the Isles lost 11 games in a row.

– Wilkes-Barre/Scranton has appeared in 12 overtime games this season, tied for most in the AHL (Providence, Hartford).

– Jonathan Gruden was recalled to Pittsburgh on Sunday and made his NHL debut with the Penguins on Monday vs. Anaheim.

– Seven of Mitch Reinke’s 14 assists this season have come in his last eight games.

– Before Raivis Ansons, the last Penguin to record his first AHL goals as a shorthanded goal was Brian Gibbons (Oct. 8, 2011).