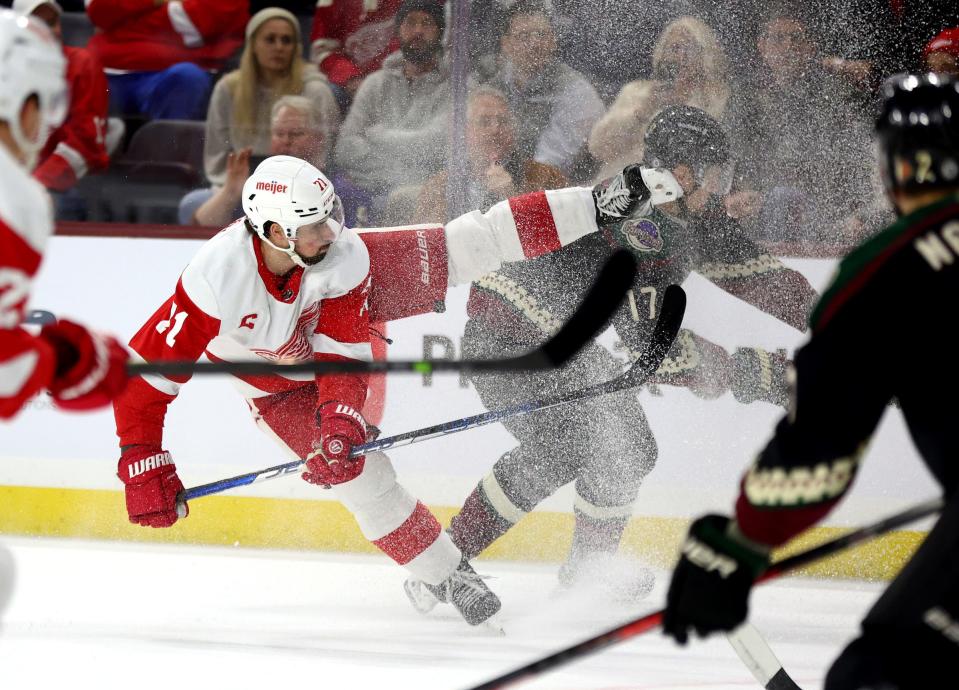 TEMPE, Ariz. — The Detroit Red Wings had the crowd on their side as they played in a college-sized arena.

Their game Tuesday at Mullett Arena offered a setting unique in the NHL, with seating capacity less than a third of most arenas. The stands were heavy on ready and white — with a smattering of empty seats — as the Wings made their only visit of the season.

The Wings outshot the Arizona Coyotes, 39-21 in regulation, but it was the Coyotes who possessed the puck almost the entire overtime. The Wings ended up settling for a point, falling 4-3 in a shootout. The Coyotes had lost nine straight coming into the game.

RED WINGS GO WEST:‘We care about trying to turn this around’

Dylan Larkin used a power play to score his 15th goal of the season, and Pius Suter added his sixth of the season to pull the Wings ahead in the third period. David Perron followed up a minute after Suter’s goal to put the Wings up by a pair. But Magnus Hellberg let in two straight shots, to Travis Boyd at 6:43 and Dylan Guenther at 7:53, spoiling the Wings’ momentum.

Mullett Arena (named after benefactors, not the hairstyle) is home to the men’s and women’s hockey teams, located in the heart of the Arizona State University campus. It became home to the Coyotes after things didn’t work out at their former home, Gila River Arena, in nearby Glendale. The Coyotes are signed to play at Mullett Arena through 2025, even as seating capacity for NHL games is capped at 4,600. (Little Caesars Arena capacity for NHL games is 19,515.) It’s not ideal for an NHL club to play at such a small rink, but it does make for an intimate feeling, and there isn’t a bad seat in the arena.

The Wings had talked about the need to set a tone early after Monday’s loss at Colorado. They did a good job establishing zone time in the first period, and tested Connor Ingram with a steady barrage. A penalty kill late in the first period ended when Barrett Hayton (who the Coyotes took at No. 5 in 2018, a spot ahead of where the Wings drafted Filip Zadina) was called for holding, setting up 41 seconds of four-on-four play. The Wings spent the first part of their eventual power play passing the puck along the left boards, but Jonatan Berggren eventually had the best chance of the period when he fired a shot from the…