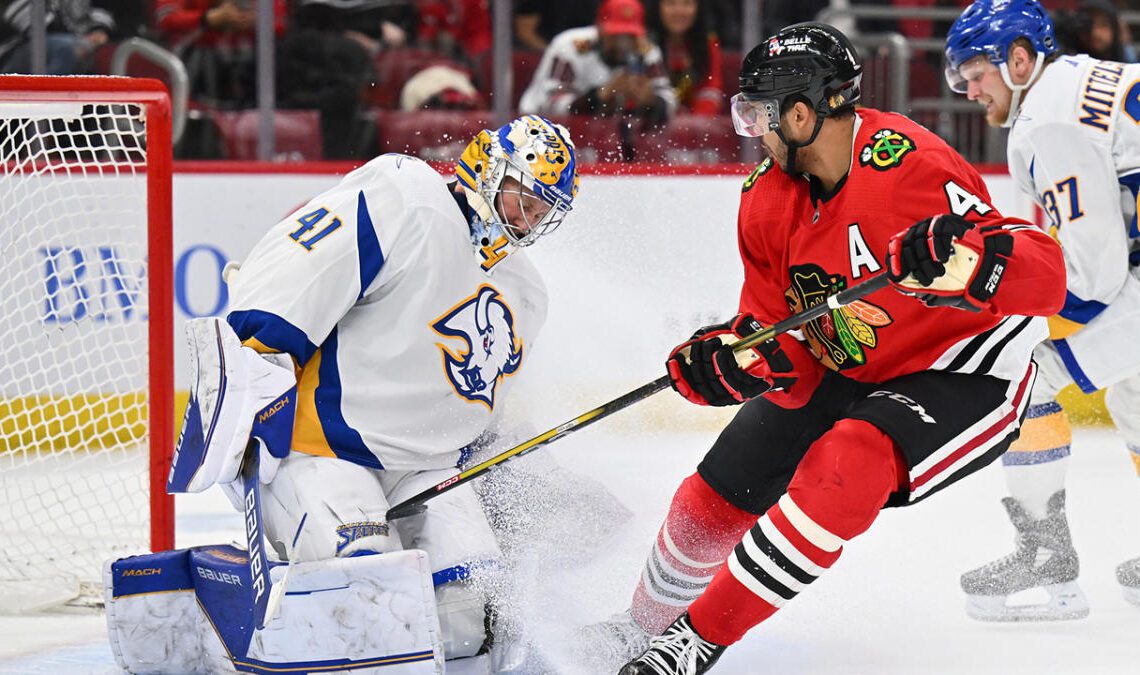 The Blackhawks rallied to beat the Buffalo Sabres 4-3 in overtime at the United Center on Tuesday.

Here are 10 observations from the win:

1. Blackhawks head coach Luke Richardson was not happy after Saturday’s 8-5 loss to Seattle in which his team allowed six goals on its first seven shots. He felt “nobody was prepared to play” and challenged the players to be better not just on the ice but away from it. The Blackhawks responded with a better effort, even though it was a slow start.

2. The Blackhawks overcame a 3-1 deficit in the third period, with Seth Jones scoring the game-tying goal in the final minute of regulation and finishing things off with the winner in overtime. He scored two goals in under three minutes after having only two goals in his first 31 games of the season. That’s a nice confidence-builder for him.

3. Philipp Kurashev had arguably his best game of the season. He scored a goal in the third period to pull Chicago within 3-2 and added two primary assists. Richardson said after the win: “Kurashev kind of led the way for us tonight. I haven’t seen him play like that, a consistent full game like that, since early in the year.”

4. Right before Kurashev’s goal, Rasmus Dahlin was hooked by Taylor Raddysh but no call was made. Second, later, the puck ended up in the back of the net. Dahlin was furious with the no-call and skated right through the Blackhawks’ goal huddle to voice his displeasure to the official, who gave him a 10-minute misconduct penalty. It was a significant moment in the game. The Sabres basically played most of the third period without their Norris Trophy-caliber defenseman and the Blackhawks took advantage.

5. Victor Olofsson scored a game-tying goal in the first period to make it 1-1. Afterward, Petr Mrazek was banging his stick on the ice, trying to get Chicago’s attention on the bench. He wanted it challenged for goaltender interference. Richardson decided not to, and I think it was the right call. It probably wouldn’t have gotten overturned, even though it looked like Tyson Jost’s stick got wedged into Mrazek’s armpit.

6. The Blackhawks improved to 16-2-2 over their last 20 games against Buffalo. They just have their number.

7. Chicago’s best line of the night was Kurashev, Taylor Raddysh and Jonathan Toews. When the three of them were on the ice at even strength, the Blackhawks out-chanced the Sabres 10-9, per…