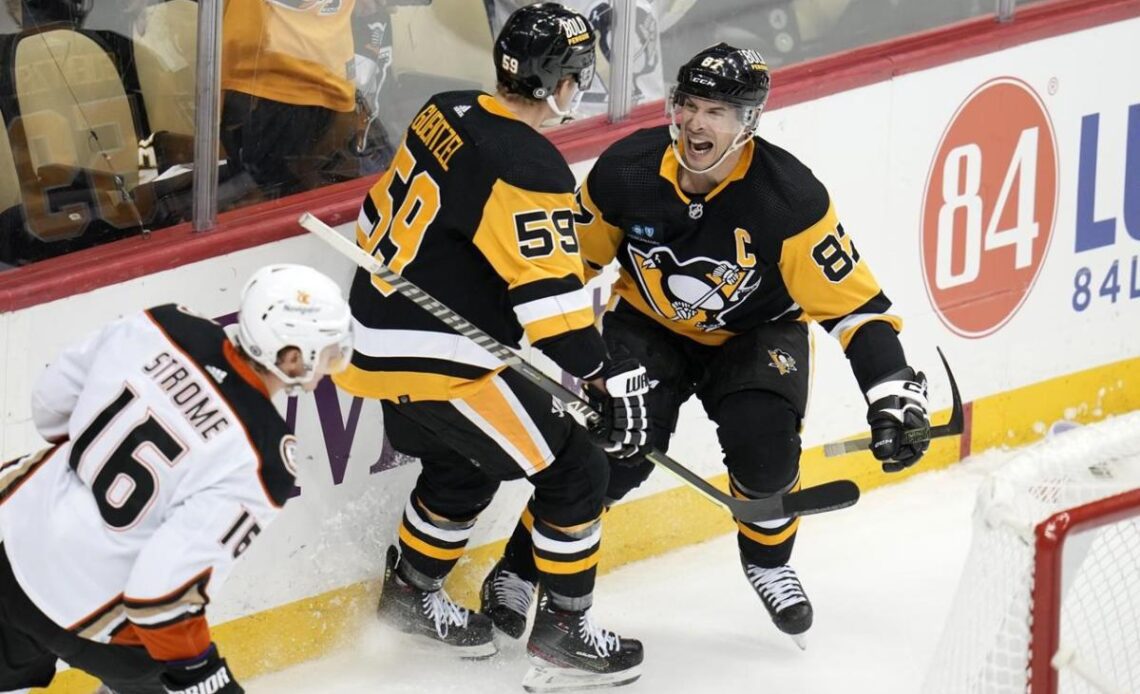 PITTSBURGH (AP) — A third-period lead over one of the worst teams in the NHL suddenly gone and well aware his club is fighting through a midseason malaise, Pittsburgh Penguins coach Mike Sullivan braced for a letdown.

“In a lot of instances that can deflate a team,” Sullivan said. “I never sensed that on the bench.”

On the ice, either.

Bryan Rust scored with 25 seconds left in regulation to tie it and Jake Guentzel beat John Gibson 33 seconds into overtime as the Penguins rallied for a 4-3 victory over the Anaheim Ducks on Monday night.

Pittsburgh appeared to be reeling after goals by Anaheim’s John Klingberg and Trevor Zegras just over four minutes apart turned a 2-1 Penguins lead into a 3-2 deficit with 4:20 left in regulation.

Instead, Pittsburgh turned up the pressure, with Rust getting his first goal since Dec. 22 thanks to a pretty backhand feed from Guentzel in front that gave Rust a wide-open net to shoot at.

“We didn’t have any doubt,” Rust said. “I think everybody had that mindset. Guys talking on the bench, ’Hey, we’re going to get this one. Keep digging. Keep pushing. Let’s get this to overtime and then we’ll win it there.’ And that’s exactly what we did.”

The Ducks had the first chance in the extra period when Zegras broke in all alone on Casey DeSmith. Yet rather than shoot, Zegras tried a drop pass to Cam Fowler that Fowler couldn’t convert.

“(We) give up one late, then I make a stupid pass in overtime (and they) go down the ice and score,” Zegras said. “Not what you want.”

Guentzel and Sidney Crosby raced the other way, with Guentzel beating Gibson from in close to snap a two-game skid and avoid a potentially crushing loss.

“It’s huge,” Guentzel said. “We need two points now and the same two points at the end of the year. You never want to lose games, but I think for us to come back tonight hopefully gives us some confidence here.”

Jason Zucker scored his 11th goal this season on his 31st birthday and Evgeni Malkin added his 15th for Pittsburgh. DeSmith stopped 26 shots to win for just the second time in his last seven starts.

Rickard Rakell had three assists in his first game against the Ducks, for whom he played 550 games to start his career before being traded to Pittsburgh last season.

Adam Henrique scored his 14th of the season for Anaheim. Gibson, a Pittsburgh native, played well in his return to his hometown. He stopped 42 shots but didn’t have an answer for Guentzel’s wrist shot as the…