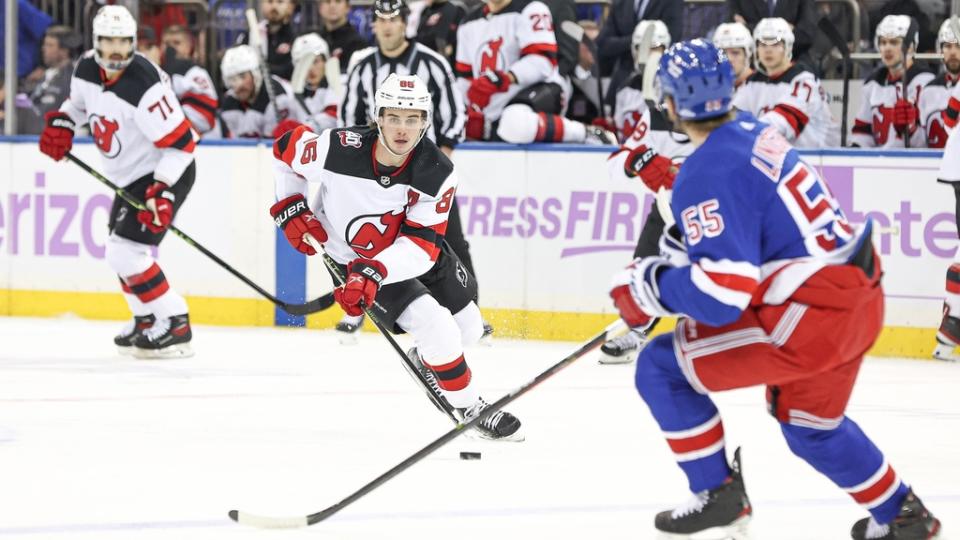 NEW YORK (AP) — Jack Hughes and Michael McLeod scored in the second period, Vitek Vanecek stopped 35 shots and the Devils rallied from an early two-goal deficit to beat the Rangers 5-3 on Monday night.

Yegor Sharangovich had two goals and Tomas Tatar also scored to help the first-place Devils win their third straight since having their 13-game winning streak snapped last week. New Jersey has won 10 straight road games and has only one loss since starting the season 3-3-0.

Vanecek improved to 11-2-0 as scattered chants of “Let’s Go Devils” were heard at Madison Square Garden.

Artemi Panarin, Mika Zibanejad and Vincent Trocheck scored and Chris Kreider had two assists for the Rangers, who fell to 4-5-3 at home. Igor Shesterkin had 33 saves.

New York lost its second straight at home in a disheartening fashion. The Rangers squandered a 3-0 third-period lead against Edmonton on Saturday to lose 4-3, and led 2-0 just 3:01 into this one. Last season, they won 27 of 41 games at the Garden.

Tatar narrowed the deficit to 2-1 at 7:31 of the first with a nifty high backhand shot past Shesterkin for his sixth of the season. Jesper Bratt had an assist on the play, giving him a point in 18 for the Devils’ 23 games this season.

Sharangovich tied it with an unassisted goal with 6:35 left in the first.

The Devils dominated the second by outshooting the Rangers 20-10 and scoring twice to take the lead for good.

Hughes put the Devils ahead at 5:44 after he gained a stride on Rangers defenseman Ryan Lindgren before sliding the puck past Shesterkin for his 12th of the season and fourth in the last two games.

McLeod made it 4-2 at 9:40 with his third goal after Miles Wood hit the crossbar behind Shesterkin.

It was the fourth time in their last six games the Devils scored at least four times and New Jersey improved to 9-0-0 when the 21-year-old Hughes — the top overall pick by the Devils in the 2019 draft — has a goal.

Trocheck scored his eighth goal on the power play for the Rangers with 6:42 left in the third to pull within one, but Sharangovich added an empty-netter with 16 seconds remaining to seal the win.