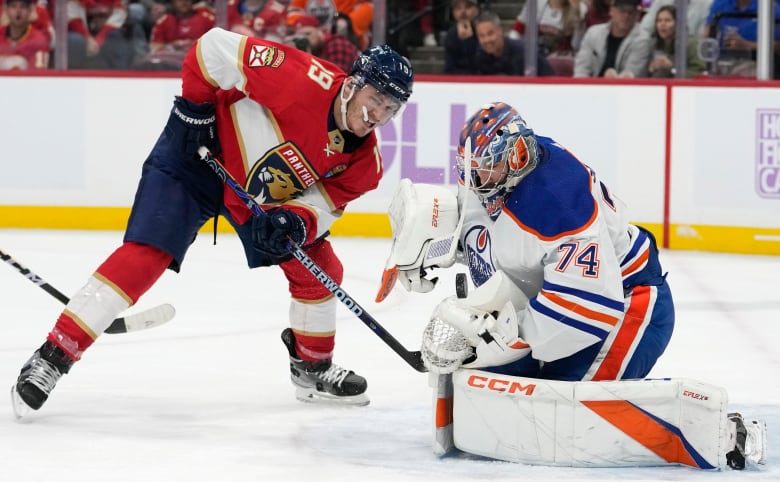 For six seasons, Matthew Tkachuk wore the fiery Flames logo on his chest. But, on the eve of his return to Calgary, he kept the rhetoric cool.

“Obviously I’ve thought about it,” Tkachuk said after his Florida Panthers skated in Edmonton late Monday morning ahead of a game against the Oilers. “But, until we get to tomorrow, I probably won’t be able to give you a good answer on it.”

The NHL schedule-maker did its best to minimize the drama of a Tkachuk return. The Panthers play two Alberta road games in two nights. First, in Edmonton, where Tkachuk was Public Enemy No. 1 for six seasons.

Then the Panthers are in the Saddledome on Tuesday, a place where Tkachuk was a hero.

There are no off-days to help build the hype, and very few opportunities for media to get the cameras and recorders in front of the American power forward.

“It’s just kind of another road trip, right now,” Tkachuk said when asked about what he expects in Calgary. “This one (against Edmonton) doesn’t particularly feel that special, but I am sure tomorrow will.

“We’ve got the game tonight, and our team is super-focused on this one, and not allowing the emotion to look past this one. But tomorrow will be special for me, for sure.”

Tkachuk, who had a 104-point season for the Flames in 2021-22 and amassed a total of 382 points for Calgary over six campaigns, was dealt in the off-season to Florida for forward Jonathan Huberdeau and defenceman MacKenzie Weegar.

It was the kind of blockbuster trade you rarely see in the NHL anymore, with so many teams being up against the cap. But it was part of Flames’ general manager Brad Treliving’s plan to rebuild his team on the fly, after star forward Johnny Gaudreau made the decision to sign as a free agent with the Columbus Blue Jackets.

While Tkachuk was not going to say anything that could be used as bulletin-board material, his coach, Paul Maurice, had no issue raving about what Tkachuk brings to the Panthers.

“I don’t know if surprised is the right word,” said Maurice, who coached the Jets before taking the reins this season with…