The New Jersey Devils faced their first form of adversity since the first two games of the season when they lost 2-1 to the Toronto Maple Leafs to end their 13-game winning streak. Fortunately, New Jersey responded by posting two wins against the Buffalo Sabres and Washington Capitals in what hopes to be the beginning of a new streak. In between, Alexander Holtz and Kevin Bahl were sent to the Utica Comets of the American Hockey League (AHL) on Wednesday (Nov. 23) where they made their presences felt immediately, before eventually being recalled back to New Jersey on Monday (Nov. 28).

Holtz and Bahl became victims of the Devils’ winning ways, as neither were able to crack the NHL lineup amidst the win streak. Both players are more than capable of making an impact, but head coach Lindy Ruff had no reason to make lineup changes after his team won 13 games in a row and 18 of its last 20. As a result, both players were assigned to the AHL, where they’d have the opportunity to log heavy minutes for a struggling Comets’ side.

“Holtzy, he’s such an enthusiastic kid… We expect him, it’s easy to say to go out and score goals, but just to generate chances and bring enthusiasm that we just expect out of him being a young, vivacious kid.” Comets’ head coach Kevin Dinnen said. “Kevin is big, strong, he’s got composure with the puck, he’s got a quiet demeanor about him, but we expect him to be a guy that’s extremely hard to play against. No fun when you’ve got a guy that is as physical as he is.”

Each played three games with the Comets before being recalled back to New Jersey. Holtz recorded one goal, which came as the overtime game-winner, and two assists in that time, while Bahl recorded three shots and was a plus-2 rating. The Comets went 2-0-1 in that stretch for a much-needed five points. Utica now sits on 15 points, tied with the Hartford Wolf Pack and Laval Rocket for bottom of the Eastern Conference. 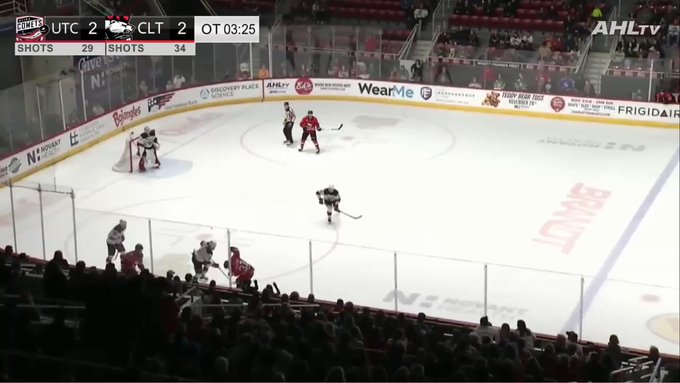 Holtz and Bahl, along with Nico Daws, were recalled back to the Devils before their matchup against the New York Rangers after Nathan Bastian picked up an upper-body injury in Saturday’s (Nov. 26) game against the Capitals and Akira Schmid came down with an illness. Holtz is expect to play against the Rangers on the Devils’ fourth line with Jesper Boqvist and Yegor Sharangovich, and also see some…