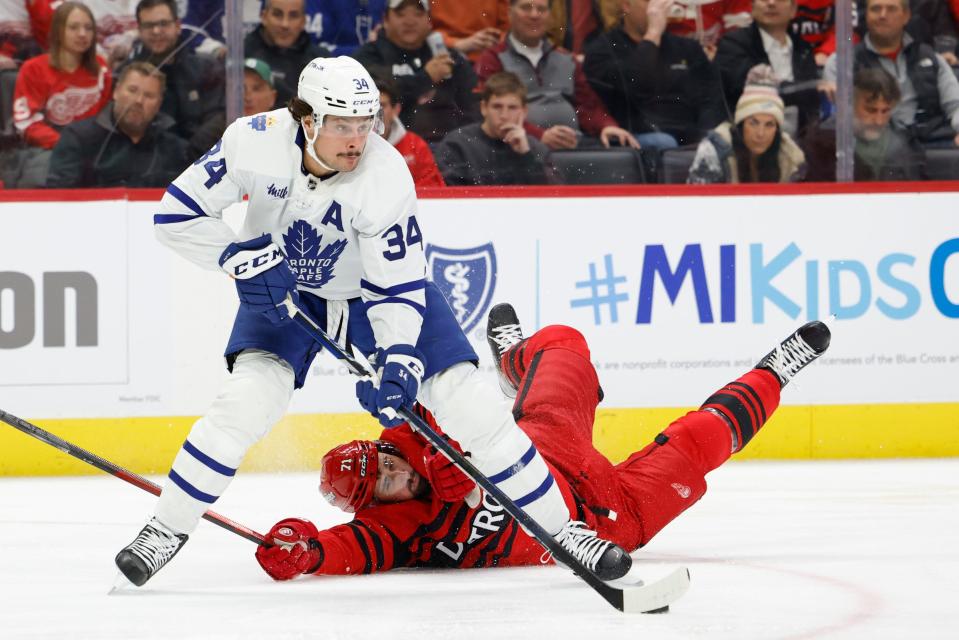 The Detroit Red Wings‘ winning streak came to an end as they struggled against an opponent with elite skill.

The Toronto Maple Leafs, in second place and one spot ahead of the Wings in the Atlantic Division, chased Ville Husso and forced the Wings to chase most of the night Monday at Little Caesars Arena. The Wings took shots at Matt Murray but lacked for top-notch chances, and that resulted in a 4-2 loss that ended a stretch of four straight victories and points in five games. It also spoiled the first time the Wings wore their retro sweaters this season.

Moritz Seider scored his second goal of the season and also picked up an assist when Adam Erne scored in the third period, after Toronto had pulled ahead by three goals.

The Wings pulled their goalie with just under three minutes to go for an extra attacker.

The Wings (11–6–4) next play Wednesday at home against the Buffalo Sabres.

The Wings tested Murray a handful of times in the first five minutes and were able to make it 1-0 when Seider won a battle for a loose puck in Toronto’s crease, at 4:45 of the first period. They had a chance to build on that momentum when Joe Veleno drew a penalty a minute later, but responded with as ineffective power play as they’ve had all year, unable to establish possession. Instead the Leafs grabbed momentum, with Auston Matthews flinging the puck from the slot to tie the game at 8:24 and William Nylander popping a rebound behind Ville Husso on a Toronto power play, at 9:15. The Wings outshot the Leafs, 10-5, in the first period.

Husso has been the Wings’ MVP this season, and would be the first to admit he would want the third goal back. Mitchell Marner scored in the opening minute of the second period on a shot that hit Husso in the chest and went in. Husso’s night ended just short of the midpoint, when Rasmus Sandin made it 4-1 on a shot from the point. For the first time this season the Wings made an in-game goaltending change. Husso’s nine saves on 13 shots made for a .692 save percentage, marking a rare night from him where he struggled.