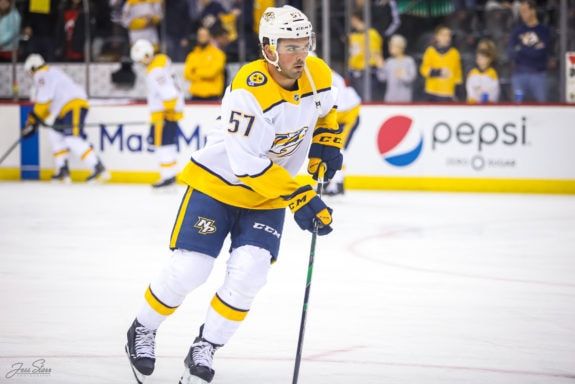 Despite that the Nashville Predators look better defensively on paper this season, they haven’t had the start they wanted from their group. They added Ryan McDonagh and have Jeremy Lauzon on their roster from the start of the season. The team also expected Dante Fabbro and Alexandre Carrier to be better than last season while hoping Roman Josi maintains his dominant play that led the team to the playoff last season.

Not only has the team failed to get the production they need from their defence, but half of their forwards have also failed to make any significant contributions offensively. It is crowded on the backend and the Predators could use a bit of help upfront either this season or in the future. This is why Fabbro’s name has come up. In a recent op-ed for the Toronto Star, Nick Kypreos wrote that general manager David Poile wants to move a defenceman and is willing to part with Fabbro for the right price (from “With Rielly out, Maple Leafs would be wise to do some early Christmas window shopping. Who’s worth a trade call?”, Toronto Star, Nov. 24, 2022).

Fabbro started the season on the top pairing with Josi but hasn’t stepped up enough. He is now on the third pairing, averaging three fewer minutes per game than in each of his first three NHL seasons. It might be time for a change, and the Predators could get a nice return for him. Now, here’s a closer look at a few teams that might be interested in becoming trade partners with Nashville.

Most defencemen rumoured to be on the move have been linked to the Toronto Maple Leafs, and for good reason. The team is missing four key d-men, and not for a short time. Morgan Rielly will be out for six weeks with a knee injury, T.J. Brodie is out with an oblique injury, Jake Muzzin might be out for the season with a back injury, and Jordie Benn has recently hit the injured reserve with an upper-body injury.

The Maple Leafs made a small trade, acquiring Conor Timmins for one of their minor-league players, but that won’t change much. Timmins was playing in the American Hockey League this season after averaging 8:34 in two games for the Arizona Coyotes. The Maple Leafs need someone who can make more of an impact, and Fabbro is the perfect target. He’s only 24 years old, with more offensive and defensive upside than he’s shown thus far, and he’s a defensively-minded right-shot blueliner….