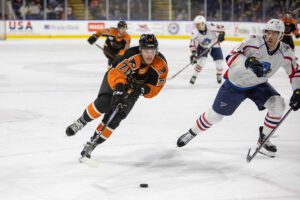 TODAY
The Lehigh Valley Phantoms make a Black Friday visit to northeast Pennsylvania for a rivalry clash against the Penguins. Tonight is the finale of a four-game road stretch for the Phantoms. Lehigh Valley is 1-1-0 against the Penguins this year and won in overtime in their lone visit to Wilkes-Barre so far this season with a 3-2 triumph on Louie Belpedio’s buzzer-beating strike with just 1.4 seconds left in the season opener on October 15.  This is Game 3 out of 12 in the season series.

LAST TIME
Ronnie Attard and Jackson Cates both posted two-point games but it wasn’t enough to overcome the Thunderbirds as Lehigh Valley’s five-game win streak came to an end at Springfield on Sunday evening. Anthony Angello recorded his second career hat trick against the Phantoms to lead the T-Birds. Angello also scored a hattie at Lehigh Valley in 2019 when he played for the Wilkes-Barre/Scranton Penguins. Garrett Wilson had a goal and a fight and Jackson Cates scored for a second consecutive game. The Phantoms had a 2-1 lead in the first period and the game was tied at 3-3 a few minutes into the third before Springfield took the lead for good. Springfield blasted out 46 shots on goal and had a 4-for-6 power play attack while the Phantoms had 41 shots in the see-saw affair.

SHOTS SHOTS SHOTS
The Phantoms have cranked up 35 or more shots on goal in each of the last three games as well as five of the last seven.
Lehigh Valley had 41 and 46 shots on goal in its last two games representing only the second time ever that Lehigh Valley has had back-to-back 40+ shot performances which they also did on December 7, 2016 and December 9, 2016 at Syracuse (50 shots) and vs. Rochester (48 shots).
The team’s 46…