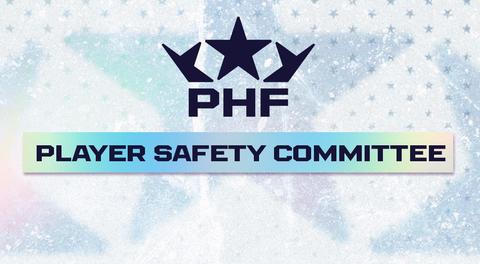 Committee is an experienced group of seven, co-chaired by Stacey Livingston and Jacqui Palm

BOSTON, MA – (November 25, 2022) – The Premier Hockey Federation (PHF) has announced the formation of a new Player Safety Committee for the 2022-23 season. The seven-member committee is co-chaired by Stacey Livingston and Jacqui Palm and is tasked with reviewing plays for potential supplemental discipline and serving as important resources to support PHF Hockey Operations.

“As two of the most experienced and respected leaders in the IIHF officiating community, Stacey Livingston and Jacqui Palm are world-class additions to the PHF in the important area of player safety,” said Lisa Haley, PHF Director of Hockey Operations. “The PHF is fortunate to have their leadership and the support of the entire Player Safety Committee to help develop the best and safest environment for PHF athletes and officials.”

Livingston and Palm have a wide range of experience and officiating leadership both on and off the ice with the IIHF including Olympics and World Championships, as well as various roles with USA Hockey and Hockey Canada respectively. Additional members of the PHF Player Safety Committee this season include Cindy Daley, Cassie Dunne, Alicia Hanrahan, Krissy Langley, and Vanessa Stratton.

“I am really excited to be part of the PHF again this season,” said Livingston, who served as the PHF’s Director of Officials during the 2022 Isobel Cup Playoffs. “The committee is focused on player safety and accountability in fair play, and we are fortunate to have great communication and interpretation with the league. The continued growth and gains of women’s hockey has been immense, and to be involved in its continued development is a privilege.”

This season, the PHF Player Safety Committee will review all reported major penalties, game misconducts, and match penalties as part of the PHF’s Player Safety Initiative. The committee will determine if additional sanctions are warranted in addition to the original infraction. Separate to committee review is the accumulation of penalties process used throughout the PHF season.