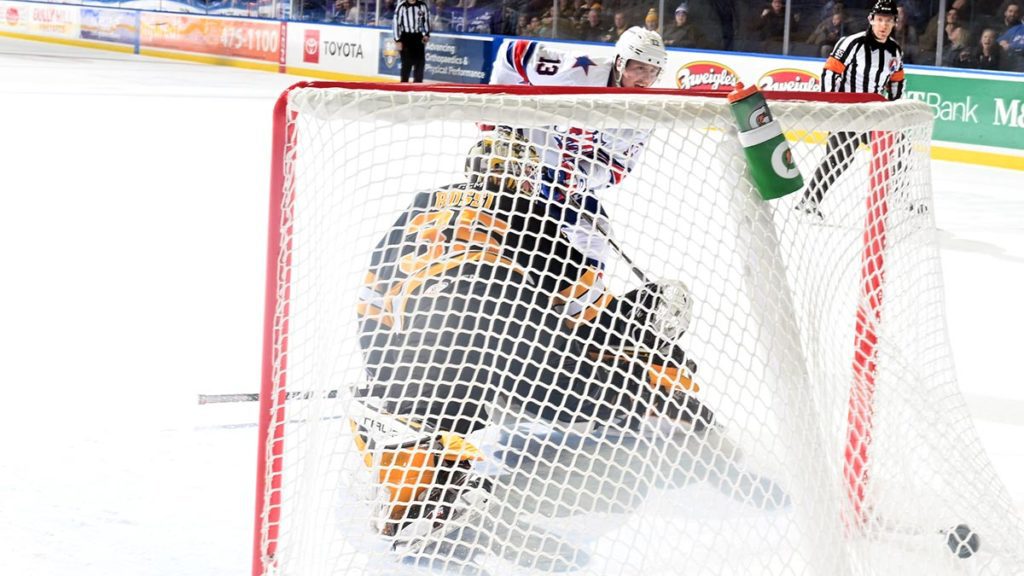 Here is a look at Wednesday around the AHL:

ROCHESTER 4, PROVIDENCE 3 (OT)
Linus Weissbach scored on a breakaway with 5.1 seconds left in regulation to lift Rochester to a 4-3 win over league-leading Providence. The Amerks (9-5-1-1) scored three times in the third period, with Brett Murray striking twice and former Bruin Anders Bjork getting the equalizer with 3:15 to play. Samuel Asselin had a goal and an assist for Providence (10-2-3-2), which is winless in its last four outings (0-1-2-1).

HERSHEY 2, SPRINGFIELD 1
Hunter Shepard made 26 saves, including a third-period robbery of Greg Printz, and Mason Morelli scored the winning goal minutes later as Hershey edged Springfield, 2-1. Connor McMichael scored his first goal of the season for the Bears (10-4-2-0). Martin Frk had the lone goal for the host Thunderbirds (7-7-0-3).

ROCKFORD 7, TEXAS 2
Brett Seney scored two goals and assisted on two others as the IceHogs rolled past the Stars. David Gust and Isaak Phillips each added a goal and two assists for Rockford (8-6-0-1), which hit the seven-goal mark for the second time this season. Mitchell Weeks stopped 28 of 30 shots from Texas (7-6-2-2).

ONTARIO 5, SAN JOSE 1
Quinton Byfield posted three assists in the Reign’s 5-1 win over the Barracuda. Ontario (9-5-0-1) scored three times in the opening period en route to a 5-0 lead and Pheonix Copley finished with 21 saves, allowing only a power-play goal from Tristen Robins.

BRIDGEPORT 6, HARTFORD 3
Otto Koivula notched two goals and an assist to lead Bridgeport past Hartford for the third time in as many meetings this season. The Islanders (10-3-3-0) also got a goal and an assist each from Chris Terry and Jeff Kubiak, and Arnaud Durandeau picked up three assists. Defenseman Ben Harpur led the Wolf Pack (5-6-1-3) with a goal and two assists on the night.

WILKES-BARRE/SCRANTON 5, CHARLOTTE 2
Former Checker Dustin Tokarski made 31 saves for his 199th career AHL win, backstopping the Penguins (8-5-1-1) to a 5-2 win in Charlotte. Valtteri Puustinen tallied a goal and an assist for Wilkes-Barre/Scranton, which is in the midst of a stretch of six games in nine nights. Henry Bowlby and Michael Del Zotto scored for the Checkers (10-5-1-1), whose four-game winning streak came to an end.

ABBOTSFORD 3, LAVAL 2
Lane Pederson’s goal late in the second period stood up as the game-winner as Abbotsford edged Laval at Place Bell. Guillaume Brisebois and Will Lockwood also scored for the Canucks (7-6-0-1), who head west to…