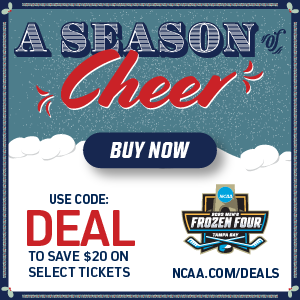 Jeff Jackson, now 15 games into his 24th season as a head coach at the college level, has been around long enough to recognize the symptoms of a team short on confidence when he sees them.

Players holding their sticks just a little bit too tight. Opting for the complicated play when a simple one will do. Simply not putting the puck in the net with enough frequency.

“Maybe because we haven’t had as much offensive success as we’d like, guys are forcing things,” Jackson said. “And then that turns into the other part of the problem. We turn pucks over, and now we’re putting our goalie and our defense in an at-risk position in transition.”

That compilation of maladies has resulted in an uneven start to the 2022-23 season for Jackson’s Notre Dame squad. After a 5-2 defeat at Boston University on Wednesday, the Fighting Irish are 6-7-2 overall, and 3-4-1 in a brutal Big Ten conference.

As of Wednesday night, Notre Dame owned the Big Ten’s worst scoring record, with 2.2 goals per game. Only 14 teams in the country light the lamp at a lower rate. The Fighting Irish’s shot totals on the season are in the middle of the pack nationally, but they’re converting on just 7.6 percent of them — also 15th-worst across college hockey.

Injuries and underperformance have plagued Jackson’s team offensively. Following the departure of Max Ellis, who scored 16 goals in 39 games last season, the widespread progression from the secondary offensive pieces of last year’s team hasn’t quite manifested yet. A pair of transfer forwards brought in this summer — Chayse Primeau and Jackson Pierson — have produced at times, but haven’t necessarily been difference-makers.

Jackson has won with teams that lack prolific scoring. Since the Fighting Irish joined the Big Ten, they’ve never finished higher than 16th nationally in goals per game. In that span, they’ve won a regular-season conference title, two Big Ten Tournament championships, appeared in the NCAA Tournament four times and been to a Frozen Four.

This time around, though, the lack of scoring is creating consequences at the other end of the ice, too. Notre Dame is surrendering 2.9 goals per game, which would tie for Notre Dame’s worst defensive record since the Fighting Irish made the move to the Big…