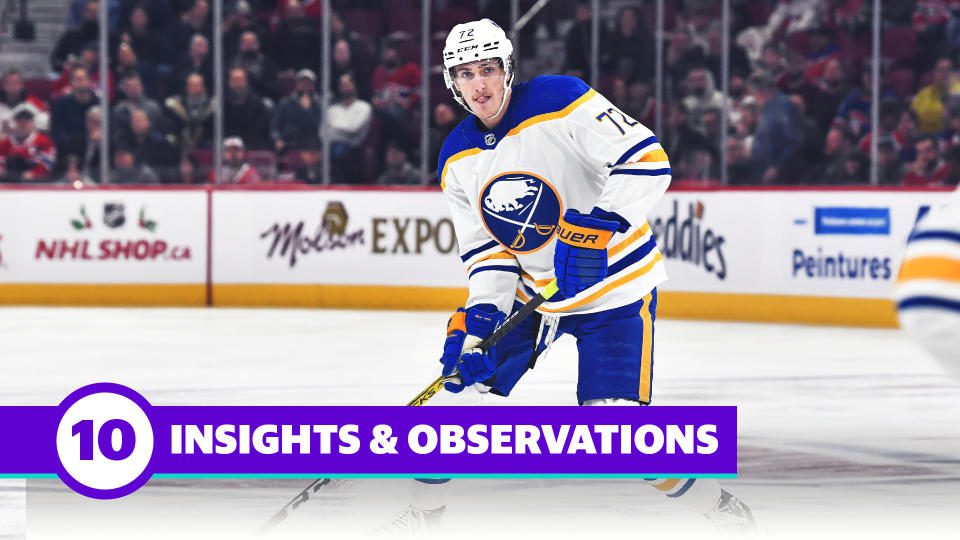 Welcome to 10 Insights and Observations. Every Thursday, I’ll use this space to highlight teams, players, storylines, and general musings around the NHL, and perhaps at times, the greater hockey world.

This week we look at players and teams rebounding, Quinn Hughes being a ray of light for Vancouver and the Nashville defenseman factory and much more.

Tage Thompson broke out with 38 goals last season, then signed a massive seven-year, $50-million contract with the Buffalo Sabres. Most people are well aware of who he is at this point. Before going pointless in the second game of a back-to-back, Thompson was on a run of 12 games where he put up 12 goals and 23 points. He had 72 shots in those 12 games. These are video game numbers. He’s had a number of highlight reel goals and assists over that stretch, combining his soft hands with his big frame to simply make plays that defenders can’t defend. He’s 6-foot-6; if he holds the puck out wide and he’s half a foot taller than you, what are you going to do? The answer is, very little. But one of the goals that oddly stuck out to me was one that was not really a highlight, on his side of things anyways, at all.

First off, the famed Jeff Skinner mohawk is full value. But that goal from Thompson was… so easy. Just a simple catch and shoot. It took him almost no effort, like super-prospect Connor Bedard playing in the WHL this season. Before his breakout last year, he had 18 career goals in 145 NHL games. Now he is getting the puck and borderline flicking it past goalies cleanly. You can tell when the game slows down for certain players. And by slow down we mean they can see everything happening, there is no rush to their play, and because of that, the decision making improves. We often hear it takes bigger players extra time to grow into their bodies before they can figure out the league. Thompson at 25 years-old appears to have done that now.

Nashville has been known as a defenseman factory over the years. From Ryan Suter to Shea Weber, from Ryan Ellis and Mattias Ekholm, followed by Roman Josi going turning into a top-three blueliner in the league. Alexandre Carrier won’t be nearly as good as any of those stars, but they’ve developed a nice…