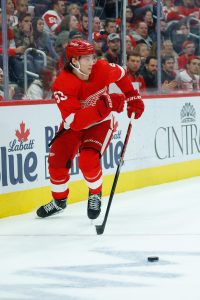 Navigating the salary cap is one of the more important tasks for any GM.  Teams that can avoid total cap chaos by walking the tightrope of inking players to deals that match their value (or compensate for future value without breaking the bank) remain successful.  Those that don’t see struggles and front office changes.

PHR will look at every NHL team and give a thorough look at their cap situation for the 2022-23 season and beyond.  This will focus more on players who are regulars on the roster versus those who may find themselves shuttling between the AHL and NHL.  All cap figures are courtesy of CapFriendly.

Raymond made an immediate impact on the Red Wings last season, quickly establishing himself as an impact scorer, something that has carried over in the early going this year as well.  GM Steve Yzerman has typically been hesitant to commit long-term contracts off of bridge deals but the winger is a candidate to be an exception.  A bridge deal could push past the $5MM mark while a long-term agreement could come closer to the $8MM range if he progresses in the second half of his contract.  His ’A’ bonuses are likely to be reached ($850K in total) while the others are less likely.  Veleno has locked down a regular role in the lineup but in a limited role.  Assuming that continues, he’s someone that will likely receive a short-term second contract that should fall around the $1.75MM to $2MM mark.

Soderblom broke camp with Detroit and immediately became the tallest player in the NHL.  When healthy, his role has been limited so far which makes it difficult to project his second contract.  Assuming he remains in the bottom six for the next couple of years, he should check in close to what Veleno’s next deal will be.  Berggren has done well in his limited action so far while being up on injury recall but is a candidate to go back to the minors as others return.  As such, a short-term deal for close to the minimum (with a higher two-way salary or even a one-way pay) is his likely outcome.