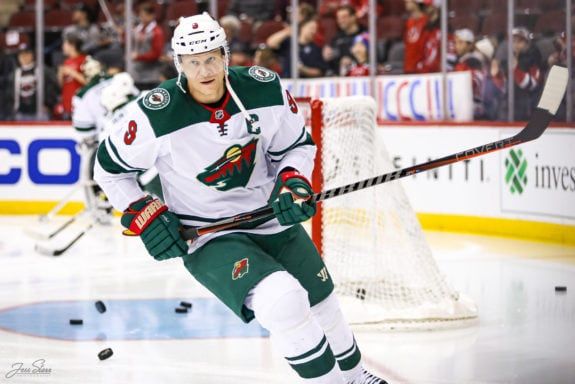 It’s American Thanksgiving and while many families are gathered around their dinner tables enjoying family time, great food, and remembering everything they’re thankful for, the Minnesota Wild will be doing the same. While their season started out rough with three straight losses, things have turned a corner as of late.

As such, our Wild crew at The Hockey Writers discussed some Thanksgiving-related questions. Tyson McKay, C.G. Jones, and Mariah Stark put together their answers to some of the things the Wild should be thankful for.

What Wild Player Are You Most Thankful for & Why?

Tyson: It is an easy choice for me. Even though he is retired, my number one is going to be the one and only Wild No. 9, Mikko Koivu. Just an outstanding player, human being, and the first player that I can say I watched the day he was drafted. I watched almost every game of his career, and I was as happy as anyone to see his number raised into the rafters at the Xcel Energy Center.

Koivu was a pioneer for the Wild and helped establish the team from the beginning. His name will forever be laced throughout the record books and for good reason, as he was and will be one of the most dominant two-way players the Wild will ever have. His influence in the locker room and on the ice shaped the organization into what it is today.

C.G.: The player I’m most thankful for is probably a sleeper, but I’m going to go with Sam Steel. As a player who was wading through bottom-nine minutes, his recent performance could mean that he sees more playing time with the likes of Kirill Kaprizov and Mats Zuccarello.

Mariah: My answer is probably cliché but I’m going to go with No. 97, Kirill Kaprizov. When I first heard about what a great player he was, I didn’t believe it until I started watching highlights and was immediately intrigued by his ability to skate circles around almost anyone. Then when he came to Minnesota, I was a little hesitant to believe that he could be the superstar the Wild had been looking for all these years, but he has turned out to be the real deal.

Kaprizov was the Wild’s first Calder Trophy winner, the first to record 100-plus points, and he’s set many more records. The crazy thing is he’s only in his third season and he’s already on a roll. The Wild have always had dedicated fans but he’s really given them a reason to cheer again and it’s going to be fun to watch his career…