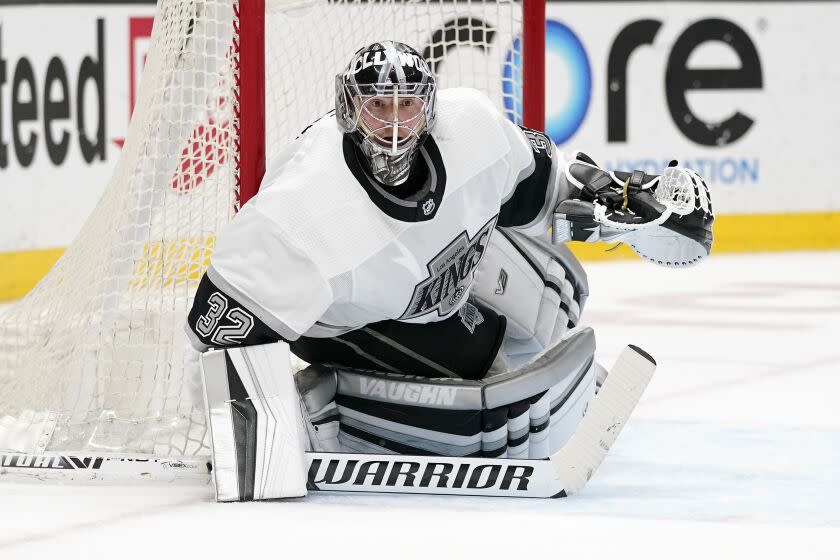 More than a dozen goaltenders have challenged Jonathan Quick’s hold on the Kings’ net. Not one has succeeded.

When Petersen was designated the opening night starter last season, it felt like the torch was being passed from the Stanley Cup-era leaders to the next generation. But Quick wasn’t ready for nostalgia or backup duty. He pulled off his best season in a while, compiling a 2.59 goals-against average and .910 save percentage to lead the Kings back to the playoffs. He also earned a shutout in their seven-game postseason loss to Edmonton.

“Every day you come in and try to get a little better. When you get the opportunity to play you try and make the most of it. It’s nothing more than that,” Quick said of outlasting so many challengers.

He still holds the torch — but the question is how much longer he’ll grip it.

The Milford, Conn., native will be 37 in January and his 10-year, $58-million contract expires after this season, which means he can become an unrestricted free agent. Has he looked ahead to that?

Has he talked to Kings executives about a new contract?

So, you don’t want to talk about it?

Fair enough. But any evaluation of his performance this season must recognize that his job has become a lot more difficult.

The Kings had to veer away from “heavy” hockey and add speed and skill to become competitive again, but they’ve built a defense corps that’s small and prone to making mistakes and bad reads that expose their goalies to dangerous shots. Quick’s 3.15 goals-against average and .892 save percentage in 14 appearances (13 starts) reflect the team’s defensive faults as well as an uptick in NHL scoring. Petersen, who should have stopped the short-side shot that put the New York Rangers ahead in the third period Tuesday and set up their 5-3 victory over the Kings, is at 3.56 and .876.