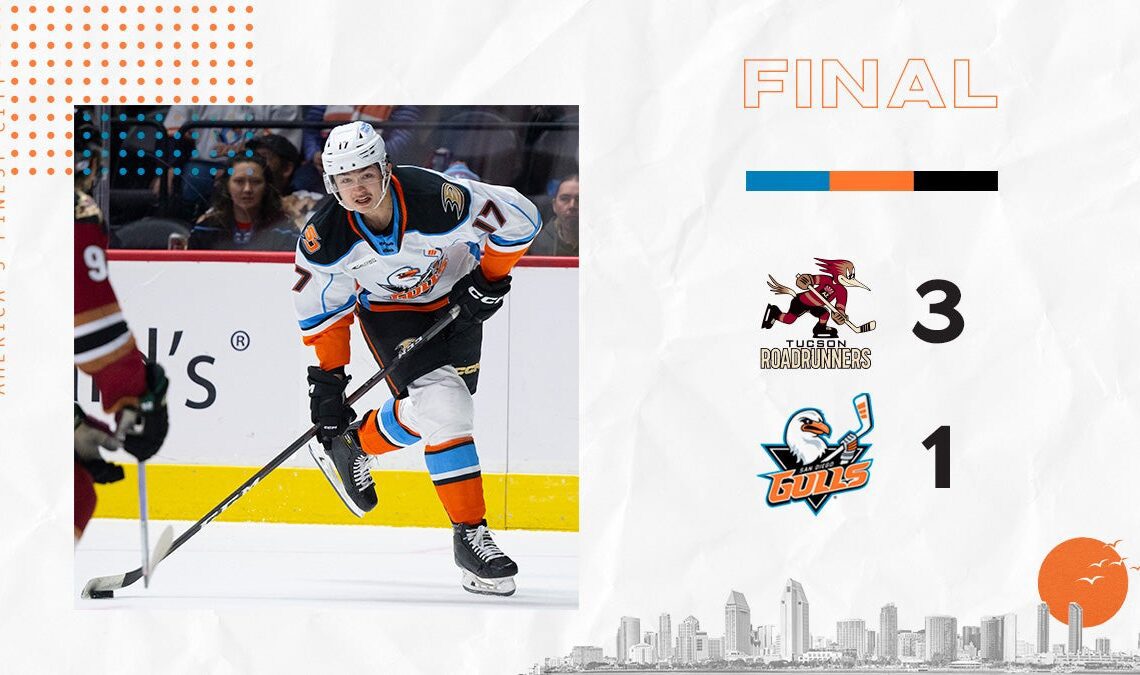 The San Diego Gulls lost 3-1 in a midweek matchup against the Tucson Roadrunners at Pechanga Arena San Diego.

The Gulls entered tonight’s contest trying to build off their 6-1 win over the Grand Rapids Griffins. However, luck was not on San Diego’s side in the opening 20 minutes. They went down 2-0 to the Roadrunners from two unfortunate deflections in the defensive zone. The first goal came after a deflection over goaltender Lukas Dostal. Tucson’s second goal came from a partially blocked shot that knuckleballed its way into the back of the net.

“I think they got two lucky bounces at the start of the game,” center Benoit-Olivier Groulx said. “It wasn’t Dostal’s fault or anything. We lost our coverage a little bit and we failed on that. But, I think overall we had a fine game. I think we got our chances.”

San Diego did get their chances in the first period. Right winger Jacob Perrault picked up a flip pass at the far blue line and attacked the net on a partial breakaway. He shot the puck around the bottom of the hashmarks with the Tucson goaltender barely getting his glove there in time. Left winger Brayden Tracey created an opportunity on the power play after he made a backhand toe-drag at the top of the circle, almost putting the puck top-shelf.

The penalty kill also contributed to the Gulls’ attack. After taking a penalty in the last two minutes of the period, left winger Rocco Grimaldi blocked a shot and went down the ice to create a 2-on-1. He slid the puck to Groulx for a dangerous chance from the slot.

The second period began with the Gulls killing off the remainder of their penalty. However, the team could not build off the early kill. Each team took a more conservative approach in this period. Both sides played strong neutral zone defense and limited shots to the perimeter in their defensive zones.

San Diego started to control the game after killing their third penalty. Dostal made a huge save late in the kill, denying Roadrunner center Jean-Sebastien Dea right in front of the crease. The Gulls built off this, establishing themselves in the Tucson zone.

This sustained pressure led to a power play. The Gulls moved the puck with ease on the man advantage, forcing the Roadrunners to chase the puck. San Diego nearly found the back of the net multiple times, but the puck did not bounce in their favor. They continued to generate scoring chances after the…