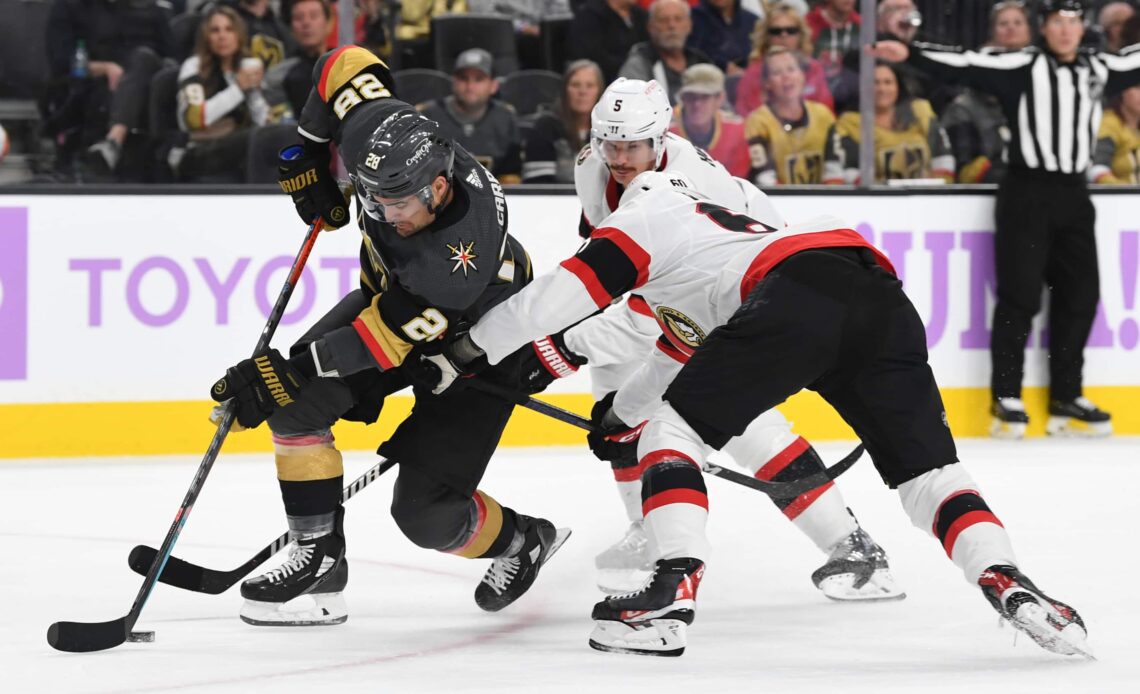 William Carrier scored his third goal in two games and the Golden Knights defeated the Ottawa Senators 4-1 on Wednesday night in Las Vegas.

Mark Stone, William Karlsson and Jack Eichel also scored for the Golden Knights. Logan Thompson stopped 38 shots to earn his 11th win, most in the NHL.

Jake Sanderson got his first career goal for Ottawa, and Cam Talbot made 32 saves.

Carrier scored his seventh of the season — his career high is nine — when he skated through the neutral zone, dangled his way past two Senators in the offensive zone and fired an off-balance wrist shot far side to give Vegas a 2-1 lead at 16:23 of the second period.

William Carrier scores a sensational goal to give Vegas the lead and they go on to defeat Ottawa 4-1.

Karlsson made it 3-1 when he lasered a backhand with his back to Talbot off a spin move from the left dot for his fifth of the season at 2:39 of the third.

Playing in his 900th career game, defenceman Alex Pietrangelo got his team-high 18th assist of the season.

Eichel’s backhand from the red line into an empty net with 1:41 left provided the final margin.

Vegas appeared to take the lead in the second period before Carrier put the Golden Knights ahead for good, but Brett Howden’s goal was disallowed after he slid headfirst into the crease and bumped the puck into the net with his hand.

The Golden Knights solidified their place atop the Western Conference standings with 33 points heading into Thanksgiving, generally a benchmark for NHL teams. According to the Elias Sports Bureau, 76 per cent of teams in playoff position on Thanksgiving went on to reach the postseason from the 2005-06 season through 2018-19, the last season not affected by the pandemic.

Vegas is looking to return to the playoffs after missing out for the first time last season.

Stone opened the scoring on a power play when he took Eichel’s no-look pass at the hash marks and fired a shot into the net. It was his ninth goal of the season and Eichel’s 15th assist.

Eichel has at least one point in 16 of Vegas’ first 21 games.

Ottawa also got on the board with a man advantage, when Sanderson’s drive from the blue line deflected slightly off Vegas defenceman Alec Martinez’s stick and past Thompson to tie it.

Sanderson became the first Montana-born skater in NHL history to score a goal.