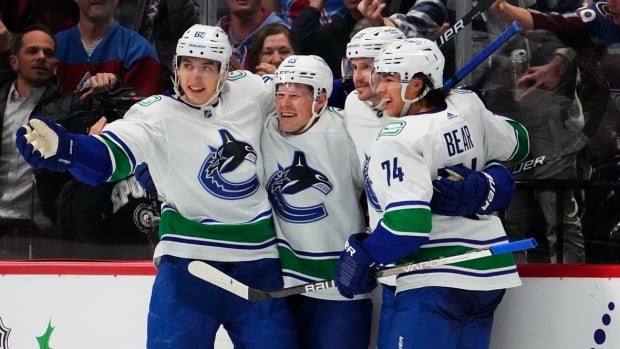 Ethan Bear snapped a tie with eight minutes to go, and the Vancouver Canucks beat the injury-plagued Colorado Avalanche 4-3 on Wednesday night.

Trailing by a goal entering the third, Shelden Dries tied it for Vancouver before Bear ripped a shot past Pavel Francouz on a 4-on-4 moments after Colorado’s Cale Makar was called for interference.

Bo Horvat scored his 16th goal for the Canucks in the opener of a three-game trip. Ilya Mikheyev also scored, and Spencer Martin stopped 33 shots in his first game against his former team.

Colorado’s Mikko Rantanen scored twice in the first period. He left after taking a high stick to the face in the second and then returned in the third.

Colorado had won three straight. After going 32-5-4 at home in the regular season en route to winning the Stanley Cup in June, the Avalanche fell to 4-3-1 at Ball Arena.

There was a brief delay with 1:03 to go when fans, already upset with the Makar interference call, threw debris on the ice after Colorado took its fifth penalty.

With the game tied at 2, Tyler Myers jammed his stick into Rantanen’s face in the second, earning a double minor. The Avs ended up with a 5-on-3, and Makar took a feed from Nathan MacKinnon (NHL-best 22nd assist) and blistered a shot from the left circle with 4:01 left.

But Dries knocked in a loose puck early in the third period to tie it.

Rantanen poked in a feed from Devon Toews to make it 1-1 midway through the first period. He got his 13th goal by knocking home a rebound with Dakota Joshua in the box for high-sticking at 17:44.

It marked the seventh straight game the league’s best power-play unit has scored.

Rodrigues went straight to the dressing room with a lower-body injury after tumbling hard to the ice when he got tied up with Kyle Burroughs late in the first.

Colorado, coming off a 3-0 trip, got off to a sloppy start.

A turnover behind the net led to Elias Pettersson finding an open Mikheyev in the slot, and his wrist shot 21 seconds in made it 1-0. It was the fastest road goal for Vancouver since Henrik Sedin scored 10 seconds in at Colorado on Oct. 24, 2014.

Oskar Olausson, Colorado’s 2021 first-round pick, was called up from the minors and made his NHL debut while skating on the…