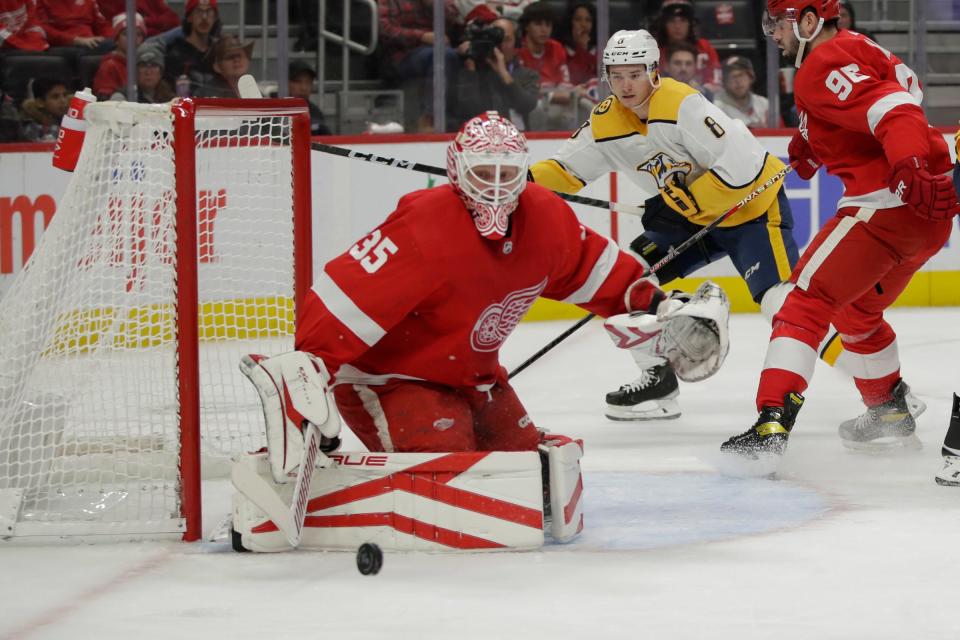 The Detroit Red Wings built on what is becoming a nice little stretch for them, feeding off the energy of a holiday-mood home crowd.

The cheering at Little Caesars Arena was loud when the Wings killed off a two-man disadvantage during their Thanksgiving Eve game against the Nashville Predators, and louder when the guys in red scored. The Wings came through with a 3-0 victory that extended their winning streak to three games and point streak to seven of a possible eight over four games.

Ville Husso delivered the kind of goaltending the Wings have come to expect: There for the saves he should make, and huge when defensive breakdowns led to grade-A chances for the Predators. Dylan Larkin and Filip Hronek —and Michael Rasmussen in the last minute — provided the goals as the Wings (10-5-4) began a five-game homestand.

TWO OF A KIND:Why Red Wings’ Derek Lalonde is a fan of Lions’ Dan Campbell

Larkin lost his balance and landed on his stomach as he sniped a shot that bested Kevin Lankinen 4:09 into the second period, sliding to the end boards before rising in celebration. It was Larkin’s ninth goal on the season and sixth point in three games. David Perron picked up his 10th assist on the play, extending his point streak to six games. It was one of the few scoring chances the Wings had in the first half of the second period, as the Predators continued to create more offensive opportunities.

Larkin’s goal stirred the Wings, and a lengthy penalty kill did the rest. Ben Chiarot was sent to the penalty box for delay of game 23 seconds after defense partner Moritz Seider went off for tripping, putting the Wings down two skaters — and two of their main penalty killers — for 1:37 near the midpoint of the second period. Larkin, Filip Hronek and Olli Määtta did a masterful job getting in lanes and Husso came through with four saves during the 5-on-3, and five saves total during the 2:37 of Predators power play time to feed the Wings’ momentum.

Not to be left out, the Wings’ power play came through, too. Dominik Kubalik drew a penalty on Alexandre Carrier at 13:06. A minute and 10 seconds…