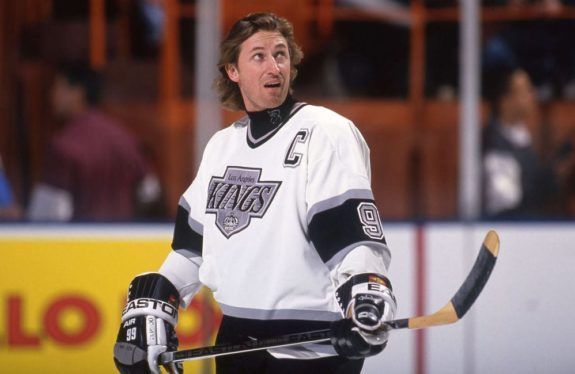 A pair of Hockey Hall of Famers scored their 600th goals on this date in National Hockey League history. There were also countless memories for both teams in New York City, and the hockey world mourned the passing of one of the all-time great head coaches. So, let’s hop aboard the THW time machine to revisit all the best moments from Nov. 23.

Two years and one day after Wayne Gretzky scored his 500th goal, the Great One hit his next huge milestone. On Nov. 23, 1998, Gretzky scored for the 600th time in his legendary career during the Los Angeles Kings’ 8-3 road win at the Detroit Red Wings. He also picked up five assists to cap off a six-point night in the Motor City.

Rangers Legends Get It Done

Rod Gilbert played his final NHL game on Nov. 23, 1977, a New York Rangers’ 6-3 win on home ice over the Colorado Rockies. The right winger spent his entire 18-season career with the Blue Shirts. He played in 1,065 games, scoring 406 goals and 1,021 points, which are all still the most in franchise history. Only Brian Leetch has more assists in a Rangers uniform than Gilbert.

When you do something that only Gordie Howe has done, you have really accomplished a major feat. Mark Messier joined Howe as the only players to appear in 1,700 NHL games on Nov. 23, 2003, during the Rangers 6-3 win over the visiting Ottawa Senators. Jaromir Jagr, Ron Francis, and Patrick Marleau have since added their names to this list. Marleau broke Howe’s all-time record of 1,767 games played on Apr. 19, 2021.

Henrik Lundqvist earned a shutout on Nov. 23, 2014, to lead New York to a 5-0 win over the Montreal Canadiens. This came after his backup, Cam Talbot, shut out the Philadelphia Flyers in the team’s previous game. This marked the first time since 1977 where the Rangers got consecutive shutouts from two different netminders. Back then,…