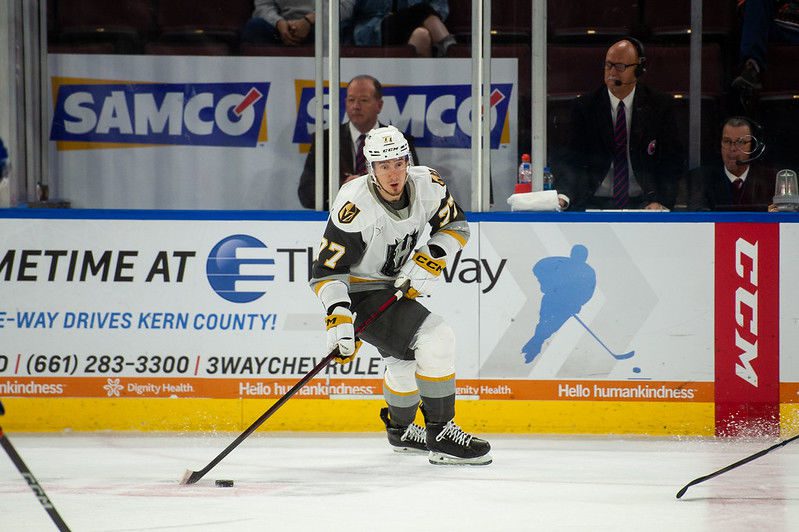 The Henderson Silver Knights take on the San Jose Barracuda in a single game contest. They will be at The Dollar Loan Center on Friday, Nov. 25. Puck drop is set for 1 p.m. PT.

Henderson stands 10th in the Pacific Division. Through their first 18 games of the season, the Silver Knights are 5-13-0.

Goaltender Jiri Patera has played in 10 games. He holds a GAA of 3.15 and a save percentage of 0.897. In his most recent start on Nov. 19, against the Ontario Reign, he posted one goal against, stopping 33 shots.

The Barracuda sit at sixth in the Pacific Division with 15 games played. Through those 15 games, they are 8-6-0-1.

Andrew Agozzino leads the scoring for San Jose with 11 points (3G, 8A) this season. Thomas Bordeleau (7G, 2A) and Tristan Robins (5G, 4A), both first year players, are tied in second among active players with nine points. William Eklund (4G, 5A), also a first year player, is tied with them at nine. He is currently inactive.

Eetu Makiniemi has played seven games for the Barracuda with a GAA of 2.27 and a save percentage of 0.926.

The Henderson Silver Knights last faced the San Jose Barracuda in a two game series on the road on Oct. 22 and Oct. 23. The Silver Knights dropped the first game, a 4-0 shutout. They fell in the second contest, 3-2. Sheldon Rempal recorded a two-point game with a goal and an assist. Jonas Rondbjerg scored Henderson’s first goal of the game, with Gage Quinney and goaltender Michael Hutchinson also appearing on the scoresheet.

On Tuesday, Nov. 22, Henderson Silver Knights lost their single-game contest against the Bakersfield Condors, 3-2.  Daniil Miromanov and Colt Conrad both recorded goals. Conrad’s marked his first of the season.

Friday, Nov. 25: Watch on AHL TV with their All-Access promotion or tune in locally with My LVTV (over-the-air on channel 33.2, Cox Cable channel 12, and on channel 21 on DIRECTV and Dish Network).  Fans can also…