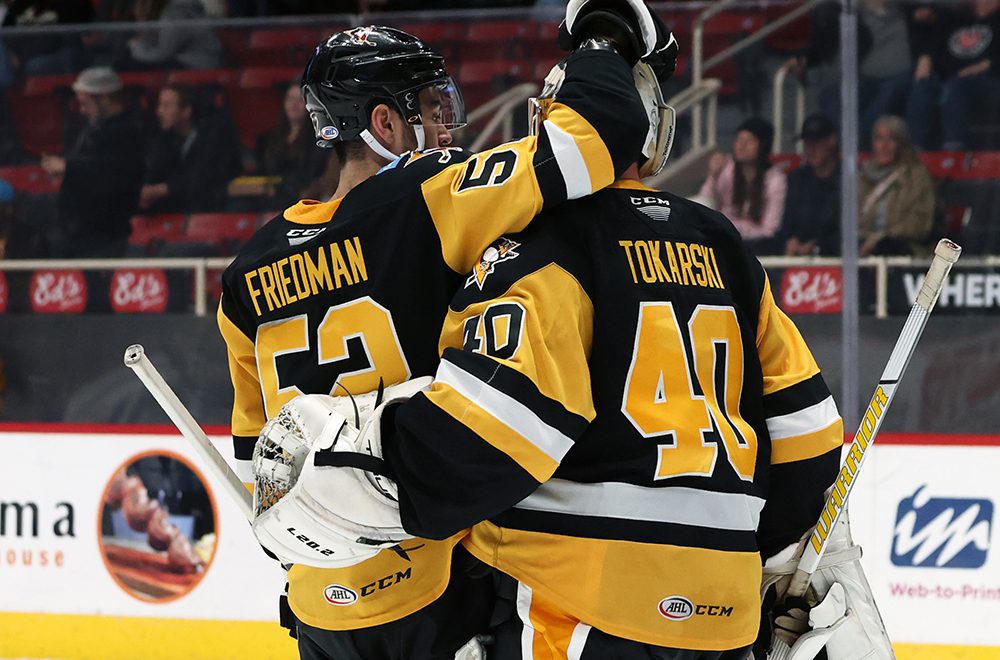 CHARLOTTE, N.C. – The Wilkes-Barre/Scranton Penguins used a scoring outburst in the second period to pull away from the Charlotte Checkers for a 5-2 win on Wednesday night at Bojangles’ Coliseum.

Wilkes-Barre/Scranton (8-5-1-1) scored three goals in 2:43 of game time in the middle frame to gain separation from Charlotte and avenge their shootout loss to the Checkers from Monday.

The Penguins seized the game’s first goal with a hard-working shift by the line of Sam Poulin, Filip Hållander and Valtteri Puustinen. When Hållander had a backdoor pass thwarted by Charlotte, he fought to earn the puck back, swung behind the net and then hit Puustinen on the opposite side. Puustinen then threw the biscuit to the far post, where Poulin was standing for the tap-in. Poulin’s finish gave Wilkes-Barre/Scranton a 1-0 lead at 5:06 of the first period.

Charlotte briefly tied the game with a strike from Henry Bowlby at 5:33 of the second period, but the Penguins took over from there.

The Penguins had all five players touch the puck on the breakout, culminating in a breakaway for Puustinen that he buried at 8:11 of the middle frame. Eighty-nine seconds later Drew O’Connor bull rushed Charlotte and muscled in another tally for Wilkes-Barre/Scranton. Seventy-four seconds after that, Tyler Sikura ran the Penguins’ lead to 4-1.

In the third period, the Checkers pulled within two on a pinballing puck that deflected off of several players before lobbing behind Penguins goalie Dustin Tokarski. However, Tokarski yielded nothing more, and Mark Friedman sealed the victory with an empty-net goal.

Wilkes-Barre/Scranton’s next game is on Black Friday, Nov. 25, against the Lehigh Valley Phantoms. Opening face-off is set for 7:05 p.m. on an Eyewitness News Fan Friday. Select draft beers are on sale for $2 from 6:00-7:30 courtesy of the PA Prostate Cancer Coalition.