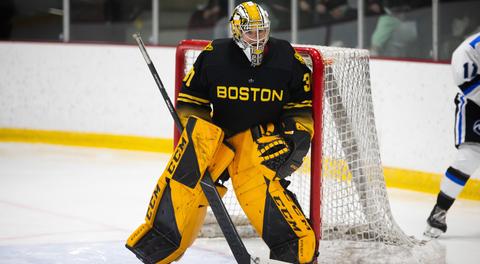 Everybody wants to make a good first impression, and if you’re a goaltender this means stopping pucks and giving your team a chance to win.

When Corinne Schroeder stepped onto the ice to for her Premier Hockey Federation debut, she did all of that and more by posting a record three-straight shutout victories to launch her professional career.

“It definitely did not cross my mind that that’s how my season would start and how our season would start, but I’m happy it did,” the Boston Pride netminder said. “It’s not something I would have guessed. Shutouts are taboo to think about. You just think about getting the best result and focusing on the next shot, the next play, and not worrying about the future but just playing in the moment. That’s where I was at, and at the end of the game there were no mistakes.”

Schroeder stopped all 36 shots she faced in a 4-0 victory over the Connecticut Whale in a rematch of last season’s final, and then turned aside all 27 to blank the Metropolitan Riveters in a 2-0 triumph that earned her first star honors across the PHF’s opening weekend. Her shutout streak continued on the road against Minnesota with 49 saves to beat the Whitecaps 2-0, followed by a 5-4 overtime victory to stay unbeaten through four games.

“The first game was nice to get that start for the home opener. I was excited but still quite a bit nervous because it was something new, something different. I hadn’t experienced playing at this level, especially against such a good team, so that was a bit nerve-racking. But I got into the swing of things pretty easily. I think there was a lot of shots both ways so it was engaging which is always nice as a goalie. Sometimes it’s really difficult to stay in a game if you aren’t getting a shot for a few minutes here or there and you end of losing that focus. My teammates did a really good job in front of me, blocking shots and making sure we executed our breakouts and everything.”

Now a member of the defending champions, the 23-year-old had no shortage of pre-game inspiration as the team opened their 2022-23 campaign with the unveiling of a third Isobel Cup banner and second in a row.

“It’s amazing to be back-to-back champions and it was a special moment that I’m glad I was able to share with my teammates who had been a part of that,” she said. “It was exciting, and a good way to start the season with motivation to make it happen again.”

The season is still early but the Pride are…