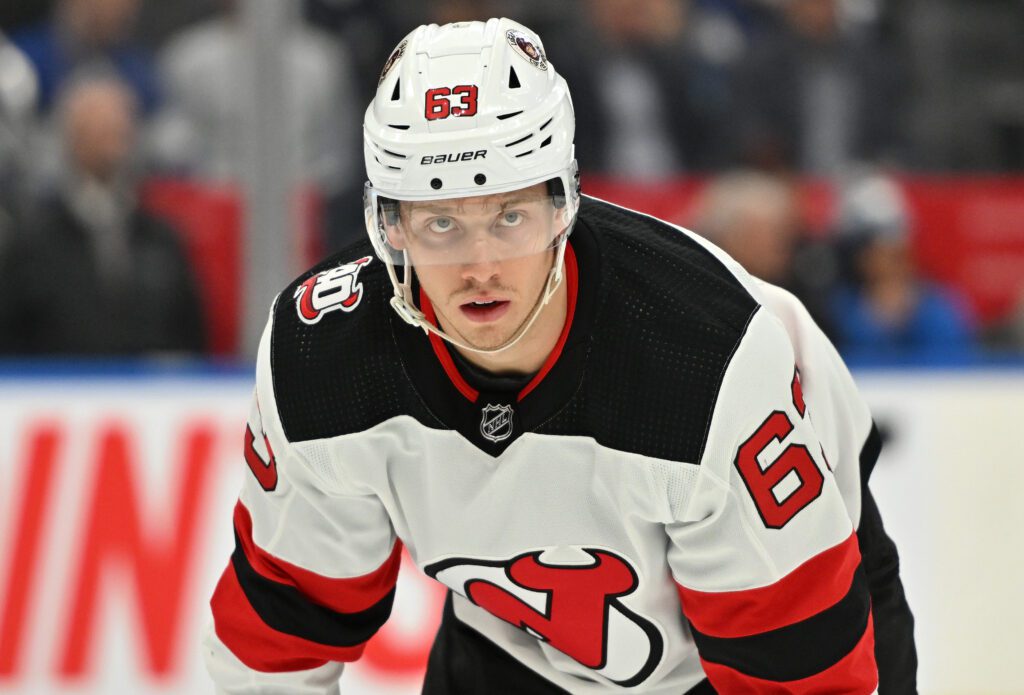 It’ll be 14 straight for the New Jersey Devils if they can pull off a win tonight, and all things are good in the organization. Jack Hughes and Nico Hischier have blossomed into star centers, Dougie Hamilton is back to being an elite offensive defenseman, and Vitek Vanecek is giving the team a stable presence in net. Above all of those performances, though, might be that of Jesper Bratt.

The 24-year-old sixth-round pick is establishing himself firmly as one of the most dynamic offensive players in the league, with 24 points in his first 19 games. That follows a 73-point campaign that seemed to be overlooked by many, thanks to the overall failures of the team. Bratt leads the Devils in scoring and has set himself up for one heck of a restricted free agent negotiation this summer.

With a $5.45MM qualifying offer, arbitration rights, and potentially back-to-back 70+ point seasons, there’s a lot of leverage in the young Swede’s camp. The Devils, for their part, are clear about their intentions – they want Bratt locked up long-term. Speaking with The Fourth Period, general manager Tom Fitzgerald indicated that talks between the Devils front office and Bratt’s agent have now started and that there has been no change to what they’re looking for.

Discussions conveniently have started. You know, with a hello to his agent, actually it was (Monday) night we sat together just to go through some things and what we’ll get going. I just don’t want this to be a distraction to the player. You know, as we go along, we know how we feel about him. And we want to tie him up long-term. We hope the feeling’s mutual.

Fitzgerald did hold up the Boston Bruins as a template, however, noting how there needs to be “enough money to go around” if you want to build a championship team. The Devils already have long-term commitments with Hughes, Hischier, and Hamilton, but none of them are outrageously priced. The Selke candidate and team captain Hischier has a $7.25MM cap hit through 2026-27, arguably one of the better value deals in the league right now. Hughes is only slightly ahead at $8MM, and Hamilton – despite being an unrestricted free agent when the team signed him – is at $9MM.

The team does have other core pieces like John Marino and Jonas Siegenthaler signed long-term, but Fitzgerald isn’t lying when he says there are plenty of other players that need money too. The Devils only have three regular forwards signed for next season: Hughes, Hischier,…