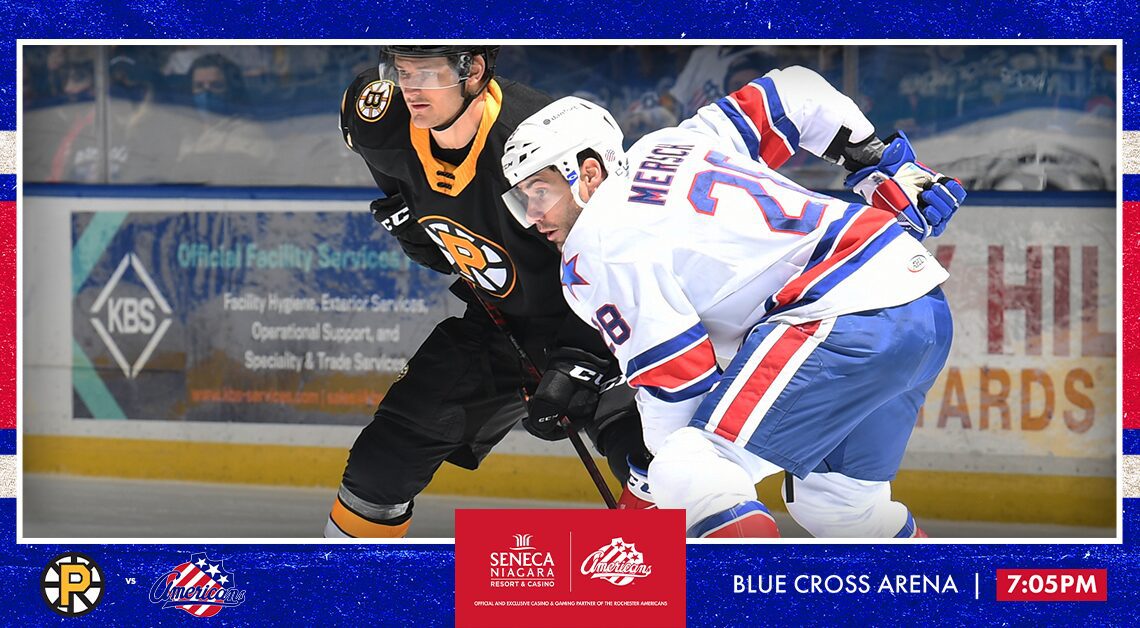 The Rochester Americans (8-5-1-1) embark on another busy stretch of three games in four nights tonight when they host the league-leading Providence Bruins (10-2-2-2) for the only time this season at The Blue Cross Arena. Game time is slated for a 7:05 p.m. start and will be carried on The Sports Leader 95.7 FM/950 AM The Fan Rochester as well as AHLTV.

Tonight represents the first time this season the Amerks will face an opponent outside the North Division after starting the campaign with 15 straight contests against divisional foes. After tonight, the two teams remain idle until Feb. 26 when Rochester makes its lone trip to Providence.

Tonight is just the 15th meeting between the Amerks and the Bruins over the last 13 years. Dating back to the 2007-08 season, Rochester has gone 3-8-2-1 during that span, including earning three out of a four possible points in two meetings with Providence last season.

Both teams boast nearly identical records this season when leading after the second period as Rochester is 5-1-1-0 while Providence shows a 6-0-1-0 mark in that regard. Additionally, both the Amerks and Bruins have winning records when being outshot by the opponent.

Dating back to the 2007-08 season, there have been nine one-goal games over the previous 16 contests between Providence and Rochester, including five of the last six.

A two-point night by rookie forward Isak Rosen (1+1), which included the eventual game-winning goal in the second period, and a 26-save effort from goaltender Michael Houser powered the Amerks to a 3-2 victory over the Utica Comets Saturday at Adirondack Bank Center.

The Amerks flipped the script after falling victim on Friday night by the same score on home ice against the Comets to split the home-and-home series. Through the first four games between the intrastate rivals, each team has now won both at home and on the road. Overall, Rochester, which has points in seven of its last nine games, boast an 8-5-1-1 record through 15 games to remain in second place of the AHL’s North Division standings.

Along with Rosen scoring his third goal of the season, Alexsandr Kisakov and Brendan Warren each netted their third to secure the win. By picking up two points, Rosen, who leads all Rochester rookies with four multi-point games, became the…