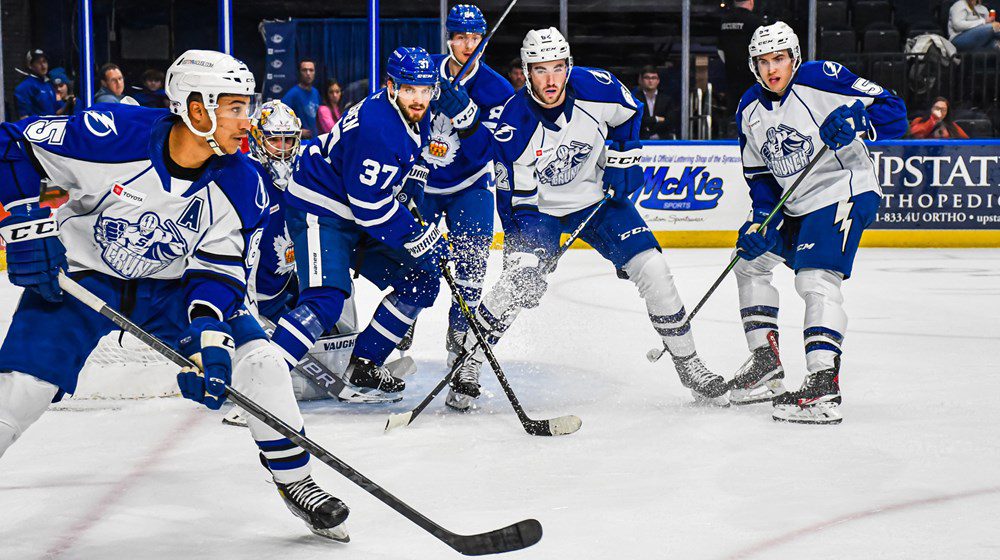 CRUNCH LOOK TO FEAST ON MARLIES

The Crunch play the first of three home games in four days as they host the Toronto Marlies at Upstate Medical University Arena.

It’s the third of six meetings between the Crunch and Marlies this season. The teams squared off twice in a three-day span in October with the Marlies grabbing two wins. Their previous match in Syracuse (Oct. 28) was decided in overtime. They will meet again next week in Toronto.

The Crunch scored four goals in a span of 4:11 early in the first period to defeat the Belleville Senators, 5-4, at CAA Arena Saturday.

The scoring spree began when Ilya Usau scored his first AHL goal 4:52 into the game. He stashed home a rebound just as a power play expired to make it 1-0. The Crunch made it 2-0 when Jack Finley buried a puck in the crease off a pass from Daniel Walcott 37 seconds later. Just over two minutes after that, Trevor Carrick blasted a power-play goal for a 3-0 lead, and Shawn Element capped the run with a slot-area deflection at 9:03 to open a 4-0 advantage.

The Senators attempted a rally, and they scored late in the first period to cut the lead to 4-1. An early power-play goal in the second period made it 4-2, but Daniel Walcott responded with his fifth goal of the season to build the lead back to three. The Sens added two more later in the period, but a scoreless third period preserved the Crunch’s fourth straight win.

Syracuse carries a four-game winning streak, which is tied for the longest active streak in the AHL. Last season, the Crunch had two winning streaks of four or more games; their longest was a six-game streak April 16-29.

Offensively, they have scored at least four goals in each game of this winning streak. They’ve totaled 22 goals in the four games, bringing their goals per game average up from 3.18 to 3.80, which ranks fourth in the AHL.

The Crunch (6-6-1-2) have wins in five of their last six overall to move up to fourth place in the North Division with 15 points.

Hugo Alnefelt has earned the win in the last two games. He is 3-2-1 in six games this…