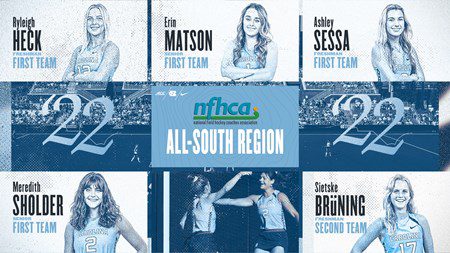 Five Tar Heels have earned all-region honors, as announced on Tuesday by the National Field Hockey Coaches Association. Seniors Erin Matson and Meredith Sholder and freshmen Ryleigh Heck, Ashley Sessa and Sietske Brüning were recognized for their play during the 2022 season, which UNC capped on Sunday with the NCAA title.

Matson, Sholder, Heck and Sessa were named to the South Region First Team. Brüning was named to the Second Team. The five started all 21 games for the Tar Heels this season.

Matson, a forward from Chadds Ford, Pa., led UNC and the nation in scoring during the season with 28 goals and 10 assists in her fifth season of play for the Tar Heels. During the season, she became the leading scorer in Atlantic Coast Conference history, and during the postseason she became the all-time leader in career points and goals in NCAA Tournament history. She was named the ACC Offensive Player for the fifth year in a row and was selected as the NCAA Tournament MVP after scoring the Tar Heels’ gamewinner with 1:29 to play in the 2-1 victory over Northwestern.

Sholder, a midfielder from Alburtis, Pa., controlled the midfield for the Tar Heels, who allowed just 21 goals in the season’s 21 games and limited opponents to an average of 3.5 shots on goal per game. She was the ACC Defensive Player of the Year and was named the ACC Tournament MVP as UNC won its sixth title in a row and 25th overall.

Heck, a forward from North Beach, N.J., ranked second on the team with 18 goals, including one in the NCAA Championship game. She was named the ACC Freshman of the Year and also was part of the All-ACC Tournament and All-NCAA Tournament teams.

Sessa, a forward/midfielder from Schwenksville, Pa., ranked third on the team with nine goals and also added five assists as the team’s primary inserter on penalty corners.

Brüning, a midfielder/back from The Hague, the Netherlands, was a pivotal player for the Tar Heels on defense and also had eight assists, including one on Heck’s goal against Northwestern.

Players are honored in one of five regions throughout the country. Each region recognizes a first team and a second team of 16 players each. First-team honorees are eligible for All-America honors, which will be…