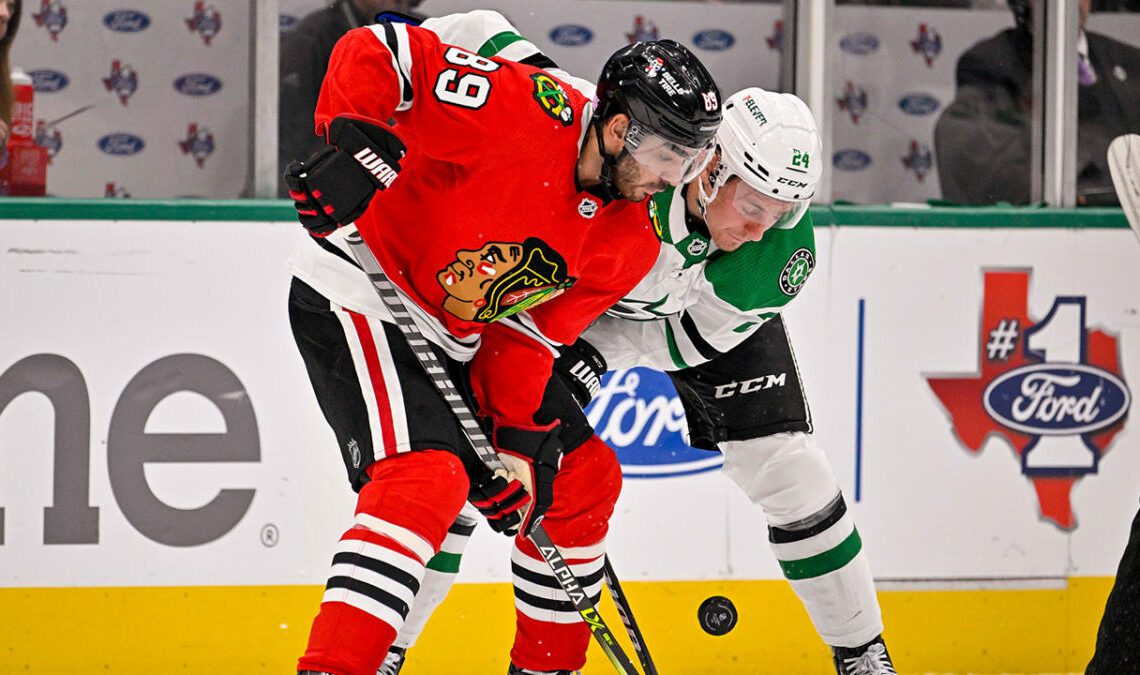 The Blackhawks squandered a three-goal lead and lost to the Dallas Stars 6-4 at American Airlines Center on Wednesday to extend their losing streak to five games.

1. The Blackhawks outshot the Stars 10-0 to start this game. They gave up only four shots in the first period, which was their fewest in a period all season. The Stars didn’t record their first shot until 6:22 left in the opening frame. And yet, it was the Blackhawks who gave up the first goal for the sixth straight game and 15th time in 19 games. Tough to swallow.

2. The Blackhawks exploded in the second period, scoring three unanswered goals from Seth Jones, Andreas Athanasiou and Connor Murphy. It was the first time they held a lead in 273:53 minutes, a span of 14 periods over four and a half games. Finally. It was probably the Blackhawks’ best periods back-to-back all season, considering the opponent.

3. The Stars threw the kitchen sink at the Blackhawks in the third period, outshooting them 22-5 and outchancing them 20-6. After the Blackhawks went up 4-1 with 10:23 left, the Stars’ win percentage was at 1.23 percent, according to Money Puck. They found a way to score five unanswered goals, including an empty-netter, to pull off the stunning comeback. It happened so fast the Blackhawks didn’t even know what hit them.

4. Max Domi had a heck of a game. He had a goal, assist and a team-high six shots on goal. But his penalty right after he scored to make it 4-1 opened the door for the Stars, who converted on the power play and ended up scoring three goals in a span of 3:57 and two goals in 14 seconds to tie things up at 4-4.

5. Jason Robertson scored twice in this game to extend his point streak to 13 games, which ties a Stars record. His 16 goals also rank tied for first in the NHL and his 31 points rank tied for second. He’s easily the quietest superstar in the league, and it’s probably because he’s not a flashy player. Get familiar with his name if you’re not already, because he’s absolutely in the Hart Trophy conversation right now.

6. Jonathan Toews picked up a primary assist on Murphy’s goal in the second period, which gives him 500 assists in his NHL career. He’s the eighth Blackhawk ever to hit that mark. A milestone that would’ve meant much more if it came in a win.

7. Seth Jones returned to the lineup after missing the last 10…