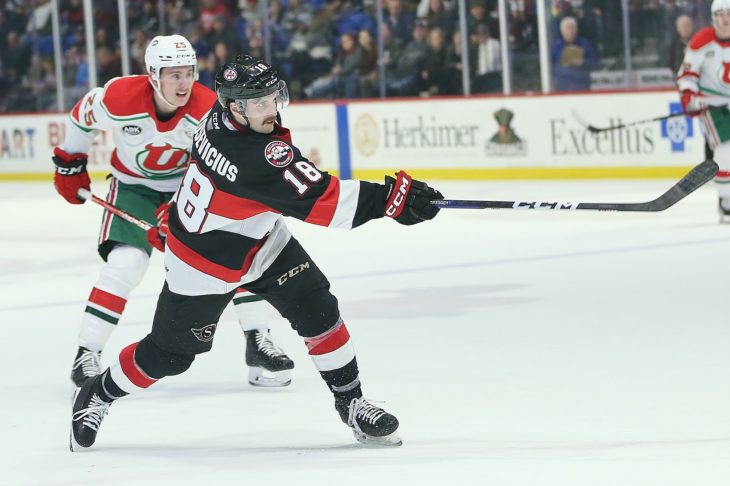 The Belleville Senators were left looking for an equalizer as they fell 3-2 to the Utica Comets at Adirondack Bank Center on Wednesday night.

Utica opened the scoring through a Nolan Stevens tally on the power play at the 14:38 mark of the first period. Later in the frame, the Comets extended their advantage as Robbie Russo made it 2-0 heading into the intermission.

Early in the second stanza, the Senators responded when Jarid Lukosevicius notched his first of the season with a redirection making the score 2-1 after forty minutes of play.

In the third, Graeme Clarke found the back of the net with a quick snapshot. However, once again, the Senators showed their resolve as Cole Cassels collected his fourth of the campaign with an extra attacker on the ice. Despite the late push, Utica would hold on for the hard-fought victory.

The Belleville Senators return to action this Friday when they host the Laval Rocket on Carpenters Union Night at CAA Arena.

Head Coach Troy Mann: “You’re not going to fault the effort tonight. I thought we did a lot of good things and maybe deserved a little bit more, at least a point.”

Tickets for all Belleville Sens home games are available via Ticketmaster or at the CAA Arena Box Office.