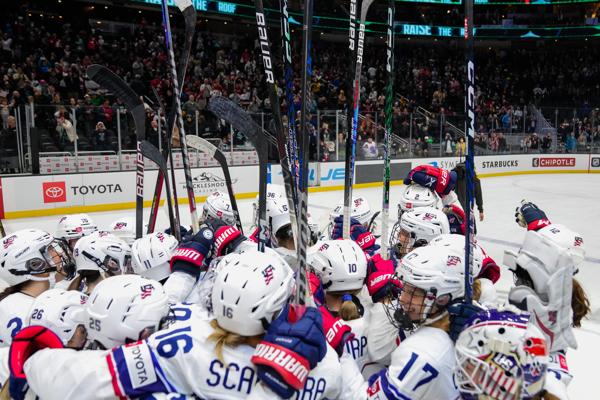 Playing games on the west coast is still relatively rare for women’s hockey players, and the team was excited to tap into the groundswell of hockey interest in the NHL’s newest market as well as the fervor for women’s sports that already exists in Seattle.

“We are really fortunate to be able to have opportunities like this and I hope there are more to come,” said Hilary Knight (Sun Valley, Idaho). “In women’s sports, we know the issue is visibility. Whenever fans show up and support women’s sports to this magnitude, we continue to progress off of that. I think this is only scratching the surface of the crowds that we can have.”

In addition to the incredible atmosphere and experience for fans, the Rivalry Series games serve a key role in the ongoing development of the Women’s National Team.

These games help the team put what they’ve learned in practices into use and help build their chemistry, and being able to spend time together to play and problem solve on the fly is invaluable.

“When you play a team over and over you get to understand the tendencies and what they do and how they do it,” said Rory Guilday (Minnetonka, Minn.). “It makes you more comfortable in your own game plan. You know what they’re going to bring, and you have to be ready to combat it.”

Despite being one of the younger players on the U.S. roster, Guilday, a sophomore at Cornell University, knows about familiarity with this opponent. In these games she was facing off against her college coach, Doug Derraugh, who serves as an assistant coach on Team Canada.

Guilday, a defender, sees similarities in how Derraugh has coached her in Ithaca and what the Canadian defense does, but enjoys playing against him and the four Cornell grads on Canada’s current roster. Historically, national team players from Cornell have been Canadian, but Guilday loves being the American representative. Playing against friends and former teammates just makes her more competitive and fuels her fire.

The 2022-23 Rivalry Series now pauses for three weeks before resuming with two west coast games, when the U.S. faces off against Canada in Henderson, Nevada, on Dec. 15 and in Los Angeles on Dec. 19. The series will conclude with two final games with date and location TBA.

Wroblewski is pleased with the start to the series, but he knows Canada will continue to be a tough test in next month’s games.

“This series always has its ups and downs. It’s sort…