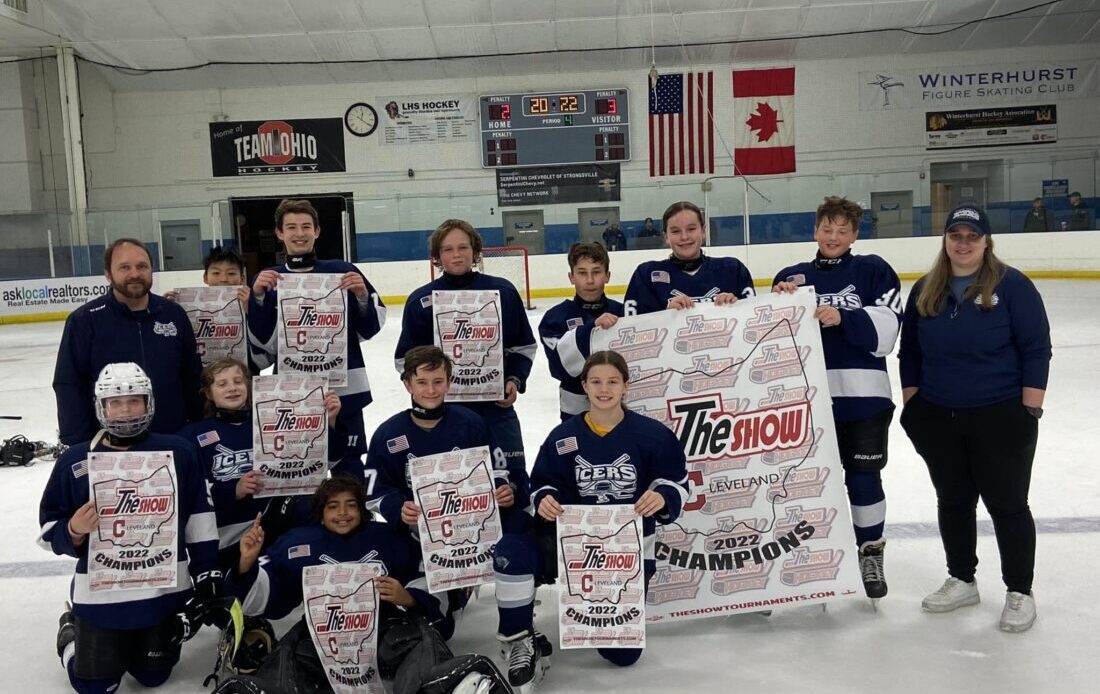 PHOTO PROVIDED
The Icers 12u team poses for a picture following their 3-2 win in the ice hockey tournament in Cleveland, Ohio over Veteran’s Day weekend.

Veterans’ Day weekend was a wild one for the 12u State College Icers ice hockey team who traveled to Cleveland, Ohio to play in “The Show – Cleveland” tournament. Ice hockey is a sport that does not really get any recognition in Clinton County, simply because it is not offered here. This Icers team consists of mainly male players but Clinton County’s very own Rylee Bottorf is one of four females to play on the team. Their first four battles were against teams from Pittsburgh, two teams from Ohio, and a team from Michigan. This Icers team is well coached by Leigh Ann Jacobs. The Icers won all four games, sending them to the championship game against a team from Michigan, The Metro Jets, who were also undefeated in the tournament. The Jets went up 2-0 in the first period. After the second period the game was tied 2-2. In true championship game fashion, the game went into overtime which then turns into a 3v3 battle. At the end of OT, the game was still tied so it went into a shootout. Each team made one goal until Aaron Bonsell of the Icers made it 2-1 and then the Icers brick wall, Maximus Stiles, blocked the final attempt by the Jets, making the final score, 3-2, and sealing the championship for the Icers to bring home the banner! Clinton County’s Rylee Bottorf was named player of the game in the first battle. The Icers swept that name with fellow teammates Isabel Kurpeikis, Maximus Stiles, Aiden Murphy, and Cooper Leitzell, who was also named SwagKing player of the game in the five games the Icers played. This team went to Cleveland and played their hearts out, went 5-0 and came home champions of “The Show” tournament.


Today’s breaking news and more in your inbox