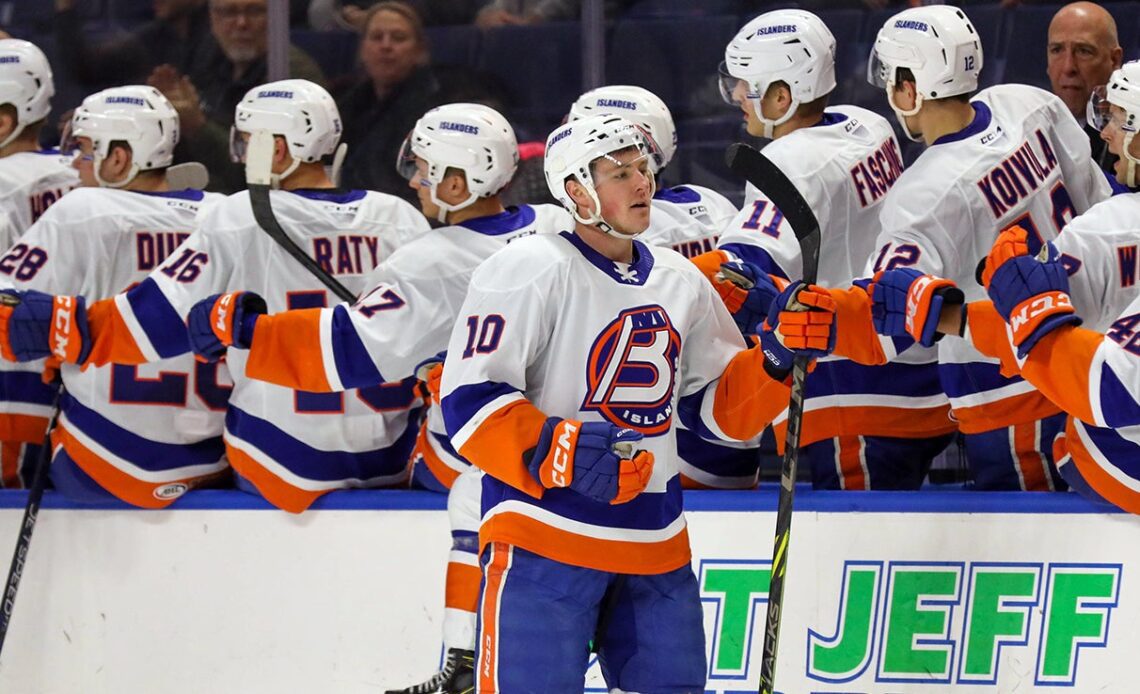 Seven different players found the back of the net, including two goals from William Dufour, to pace the Bridgeport Islanders (9-3-3-0) to a 2-1-0-0 record last weekend. The Islanders are third in the Atlantic Division with 21 points through their first 15 games.

Beginning Friday, Bridgeport hosted the Charlotte Checkers (9-4-1-1), American Hockey League affiliate of the Florida Panthers, for the second time this month. Charlotte opened the scoring just 27 seconds in and added another tally at the 7:02 mark before Hudson Fasching scored his sixth goal of the year 10 minutes into the frame. In his third game since being recalled from the Worcester Railers (ECHL), Ryan MacKinnon recorded his first point of the season with a primary assist. The Checkers added two insurance goals in the third period to complete their 4-1 win. Jakub Skarek (3-2-2) made 14 saves.

Twenty-four hours later, the Islanders hosted the Wilkes-Barre/Scranton Penguins for the first time this season and snapped a four-game slide with a 4-2 victory. Pittsburgh’s affiliate started the scoring and held a 1-0 lead through the first period until Dufour struck on the power play, knotting the game at 1-1. Wilkes-Barre/Scranton responded with three minutes left in the second, but Otto Koivula fired back and buried the equalizer with 18 ticks left in the frame. The Islanders dominated from there, adding scores from Kyle MacLean and Parker Wotherspoon. Dufour, Koivula, and Wotherspoon each scored once and added an assist while Samuel Bolduc, Cole Bardreau, and Paul LaDue notched a helper. Cory Schneider (6-1-1) made 30 saves.

The Islanders hit the road on Sunday, traveling to Providence for the third time already this season. Bridgeport conceded the first goal before Dufour’s second tally of the weekend knotted the game at 1-1 just seven seconds after Boston’s affiliate made it 1-0. Chris Wagner put the Bruins back ahead until 7:51 of the third period, when Erik Brown snuck a rebound past goaltender Keith Kinkaid. Aatu Raty crowned himself the hero in overtime, scoring his third goal of the year 2:59 into the sudden-death period. Bolduc, Bardreau, and Vincent Sevigny added helpers in the 3-2 win. Skarek made 43 saves, setting a new career high and earning the AHL’s Second Star of the Night.

The Islanders return to action tomorrow night with a 7 p.m. matchup against the Hartford Wolf…