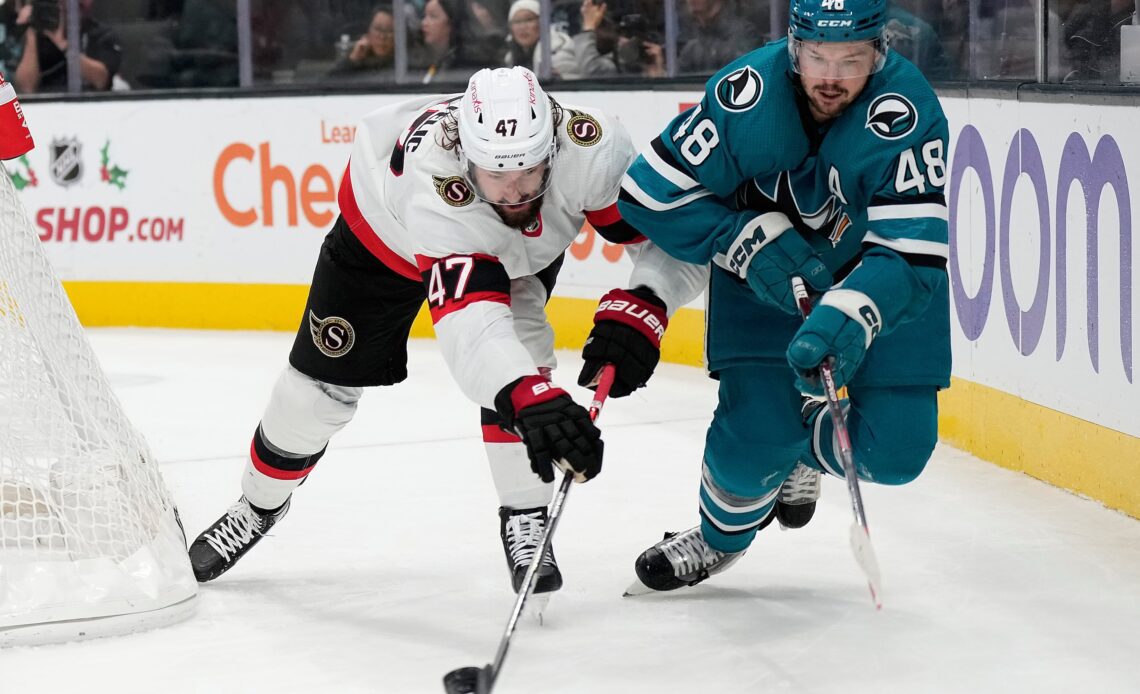 Erik Karlsson had an assist on the game-winning goal against his former team as the San Jose Sharks beat the Ottawa Senators 5-1 on Monday night.

Senators goalie Cam Talbot was pulled in the second period for Anton Forsberg after giving up three goals on seven shots. Forsberg made 21 saves.

Tim Stutzle scored for Ottawa, assisted by Brady Tkachuk. The Senators lost their second straight game and have a 2-9-1 record in their last 12 games.

Gregor hit the post on a breakaway but scored shortly afterward to give the Sharks the lead with his first goal of the season.

Stutzle scored his seventh to tie it at 1 in the first period. Tkachuk made a nice pass from behind the net to create the opportunity.

Meier put the Sharks ahead 2-1 just 1:18 into the second after a sweet feed from Karlsson. Meier extended his point streak to four games by scoring his ninth goal.

Cam Talbot is replaced by Anton Forsberg after allowing three goals on seven shots as Ottawa falls to San Jose 5-1 for the second straight loss.

Nieto scored his fourth goal in the second on a tip-in to make it 3-1 after Matt Benning flung a puck toward the net. It was Nieto’s third goal in his last four games.

Hertl scored a power-play goal with 4:04 left in the second. The Sharks held the puck in the offensive zone for the entire power play, and Hertl got his fifth of the season.

Couture sent one the length of the ice for an empty-net goal with 58 seconds left. It was his 10th goal of the season.

Sharks rookie defenceman Nick Cicek got into his first NHL fight against Mark Kastelic after they came together in front of the San Jose net.