Michigan Sophomore Off to Fast Start Thanks to Offseason Work 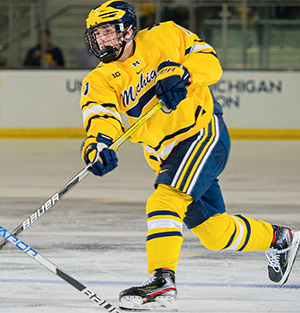 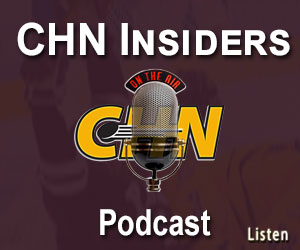 The 2022 World Juniors being rescheduled from its traditional timeline around the holidays to August was perhaps a blessing in disguise for Mackie Samoskevich. Before heading back to Ann Arbor for his sophomore campaign, the Newtown, Conn., native collected three assists in five games in international play.

While Team USA ultimately fell short of qualifying to play in a medal game, Samoskevich points to his brief time in Edmonton as a big reason why he’s gotten off to a hot start with the Wolverines this year.

“Playing in the World Juniors at the end of summer was a huge thing,” Samoskevich said. “Sometimes, at the start of the year, you kind of get jeebies a little bit; maybe you get off to a slow start just because you haven’t played a game in a while. Playing against the best players in the world right before the season was a huge help for sure.”

Through the first 14 games, the Florida Panthers 2021 first-round pick already has 11 goals and nine assists. The team had been playing well, too, absorbing a change in coach and losing a number of high-end players to the pros.

Before his time with Team USA, Samoskevich enjoyed a solid second half to his freshman campaign. Over his final 13 games, he picked up 11 points while helping Michigan advance to the Frozen Four.

Heading into Michigan’s showdown with Harvard this weekend, Samoskevich is third in the NCAA with 20 points, six behind Western Michigan’s Ryan McAllister and only three points behind teammate Adam Fantilli.

Samoskevich and Fantilli played together in the USHL with the Chicago Steel, winning the Clark Cup in the 2020-21 season. Although the two didn’t have the opportunity to play on a line that much in Chicago, players’ tendencies can still be picked up in practice and just being in close quarters.

The two have primarily played on a line together for the Wolverines this season. Aside from the skill level that Fantilli brings to the table, having another familiar face has aided in Samoskevich’s strong start.

“We kind of think the game alike in certain ways, so it definitely makes the transition easier for him and makes the game easier to play and smoother for us. So, being on the same page just makes it that much easier,” the young forward said.